10 Most Nerfed Champions in League of Legends History (P1). 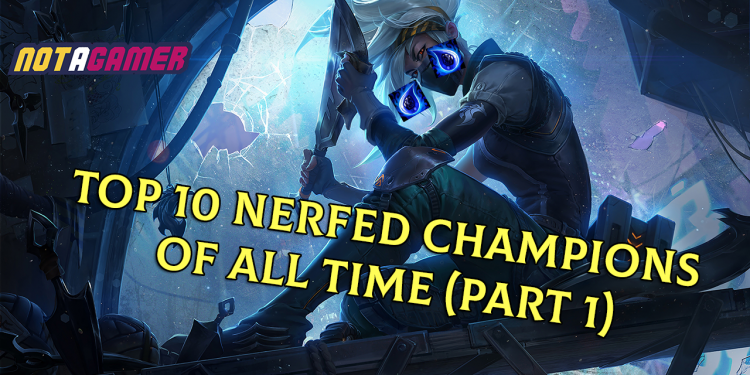 How hard can a champion be nerfed? Could it be an instant lost just by picking them? Let’s find out.

Akali received her update had made Akali became one of the most broken champions of all time, with almost no way to counter her, and it took nerf after nerf to bring her down to a point where she is finally under control. Akali’s problem was even though her win rate overall has been reduced, she is still exceptionally strong and too dominant in the right pro player hand and in competitive play she has such an impact that Riot had to keep removing mechanic from her kit in order to maintain balance. She took several nerf to her sustain, mobility, and damage to barely control her.

Her greatest nerf hit her in 2 different patches. When she lost the ability to fully hidden herself with her W – (Twilight Shroud), on the relaunch, there was no way to reveal Akali in her stealth: she couldn’t even be targeted by turrets, and could dive her opponents while they tried to farm safely. The second nerf came several patches later, made she got revealed when hit by abilities that provided true sight such as Lee Sin Q, this change sure made counterplay against Akali easier. We can see right now that Akali is falling hard from her glory.

What if you couldn’t even auto-attack anyone in team fight? Since the update, Irelia’s new skillsets which granted her 3 skill shot skills and a new mechanic, Riot wanted to bring a fresh experience to Summoner’s Rift. Despite Irelia main loved her, she was a nightmare monster that was immediately hot-fixed the next day, with nerfs to her base stats, Q, E, and Ult. It took much more effort than a simple hotfix for Riot to tame the beast they had created.

While receiving multiple nerf throughout several patches, 2 back-to-back nerf hit her the most. Patch 9.2, she lost the bonus damage against shields from her passive, her Q against minions was also lowered and the biggest hit was her Ult losing it’s disarmed effect. Two weeks later, 9.3 made her W – (Defiant Dance) only able to reduce incoming physical damage. These changes both affected her to prevent her from uncounterable even against mage or marksman.

One champion went from S-tier to the worst no-one-pick tier is Evelynn in the first season. She wasn’t been seen at high levels of competition but she was an extreme pub monster who refused to buy Pink Ward. The nerf completely destroyed her and proved how bad Riot managed with broken champions. Her first attack out of stealth was changed from stun to slow combined with her losing some attack speed and healing, she ended up with only a 34% win rate. There was a time Evelynn would get banned in order to avoid players from picking her.