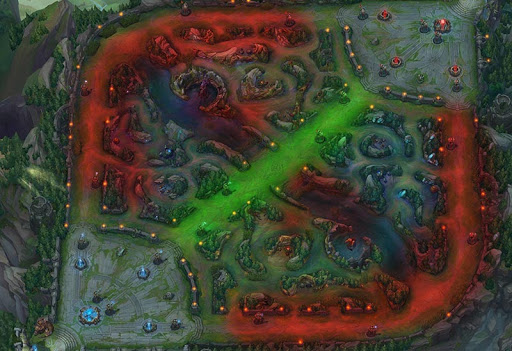 Mid lane has been the most popular role since the inception of League of Legends. It is known for its high map impact and heavy damage playstyle. What follows is everything you need to know to start dominating your games as a mid laner.

A majority of League of Legends players have a bad habit that is placing wards in 2 mid river bushes and thinking that gonna keep them safe from enemy’s jungler. In reality, it doesn’t give you any information about the jungle pathing and routing or the ganking intention of the enemy. It even fails at helping you to avoid enemy’s ganking because there are many other ways for enemy’s jungler to choose.

Please get rid of that bad habit and try to place wards deeply in opponent’s jungle, especially the one you need to place in their raptor area. This place is where every junglers have to pass through, having vision control in this area will provide you creep score (CS) and pathing of enemy’s jungler, therefore assist both you and your teammate’s lanning phase. Avoid being ganked unexpectedly is crucial for better chance of winning the lane.

Most of the time, there are 3 type matchup in laning phase : agressive, defensive, and balance. The most impactful factor that determines these categories is champion’s kit and their “arch-type” and you need to apprehend the situation for figuring out a suitable and better strategy.

In the agressive matchup or the matchup that you have the upper hands, mean that your champion has a better kit and higher damage output, you need to seek a way to take down your opponent or atleast have marginally better trades with them. For short, try to do something that give you advantages and from there you can dominate the lane. For example, you use Fizz and have a matchup with Twisted Fate, your priority should be trying to attack Twisted Fate because your damage is superior. The only thing that can stop Fizz from attacking Twisted Fate is his Yellow Card which can be easily dodged by Fizz‘s E – Playful.

On the contrary, we have defensive laning phase, this is when your champion is much weaker than enemy’s earlygame. In this scenario, a better solution is trying to peacefully farm and survive. Your goal is to be stronger than your opponent in lategame. Like in the case of Kassadin versus Talon matchup, Kassadin has no chance winning in a duel with Talon. The best option is to farm and waiting for Seeker’s Armguard, try to avoid dueling with Talon. Don’t die in a disadvantage matchup is already a win for you.

Last is balance matchup, this is when both you and the opponent can’t do anything against each other. At this moment, trying for kill is tough and because of that, you must create pressure in another lanes with your ganking. Example, in Syndra versus Orianna matchup, both have great wave clearing so the factors that determine who is better is in the damage output and the pressure or influence they have on other lanes.

Step 3: Guess which items your opponent might use and find a way to reduce its power

Let go back to Kassadin versus Talon matchup, we already talked about Kassasin but how about Talon, how to win a lane dominantly as Talon ? In most of the cases, when a mage has a matchup with an assassin, the item to buy in the first recall must be Seeker’s Armguard. After they bought this item, your winning condition is much tougher.

Because of that, as Talon you must have a consistent pressure on the opponent, force them to trade HP for CS or vice versa. When you reached 1100 gold, recall right away and buy Serrated Dirk. If the pressure you have on them is strong enough, their would not have enough 1100 gold and they can’t obtain Seeker’s Armguard on their first recall. Therefore, there is a opportunity to have a solokill and from there, your chance of winning lane is so much bigger.