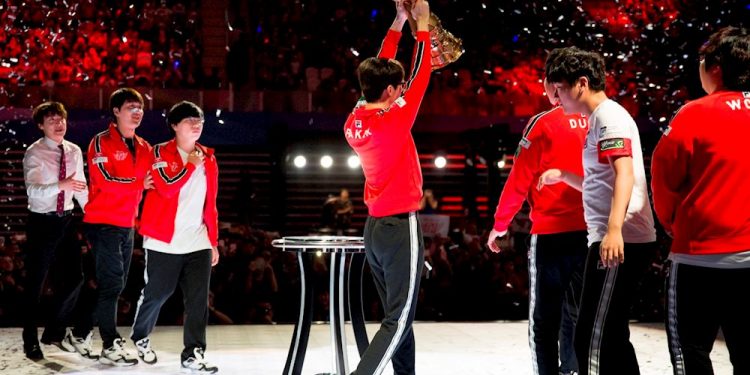 After the golden age of the years 2013 – 2016 with 3 World Championship titles and a series of titles. However, in recent years, the team that owns the largest number of fans in the world SKT has a lower proportion than the emerging teams such as Kingzone, KT or IG in 2018. However, at the beginning of 2019 SKT has recruited a lot of gods such as Khan, Clid, Teddy, Mata since then to win the LCK championship in spring 2019, Faker and his teammates seem to have regained the winning formula buried so long in 1 – 2 year.

Will MSI be the right time for SKT to establish their own new era of Korea and Korea in the world map of League of Legends?

2018 was a very bad year when SKT did not win a ticket to the World Championship. It seems that their  at that time were carrying too much pressure when  is the very better achievements team in the world – SKT T1. ADC couple – supporting Lee “Wolf” Jae-wan and Bae “Bang” Jun-sik are all in the make mistakes, while the star in the middle of Lee “Faker” Sang – hyeok still fidgeted in finding again self.

The disastrous performance, the players down to the top form are the main reasons for SKT’s leaders to make a big change in early 2019. The decision is made that the whole team will be must leave, only Faker is retained and promises to be the center of SKT’s reconstruction.

Kim “Khan” Dong-ha for the Top Lane, Kim “Clid” Tae-min replaces Blank in a jungle position, Park “Teddy” Jin-seong and Cho “Mata” Se-hyeong will merge into a couple Bot Lane. With the lineup made up of big stars, SKT has transformed strongly and become the champion of LCK in the spring of 2019.

At the beginning of 2019 when LCK Spring 2019 has just started, it is not denied that SKT is an extremely strong team with excellent and experienced individuals, however there are still inconsistencies coming from phases Combat. Combined, Khan did not seem to be familiar with SKT’s play style and did not really play well with the resisting champions tank.

In the group stage, SKT still plays stably and is rated 2nd in the Korean area after Griffin youth team. But the king was still king and once they got to the playoffs, SKT made an unexplainable way and for the first time they showed their tremendous strength when defeating Kingzone DragonX in the battle semifinal. But the biggest surprise that fans can imagine happened in the final, when SKT defeated Griffin in a with a convincing 3 – 0 score.

Right now, SKT has had the opportunity to make history at MSI. This will be a tournament that brings together highly qualified players and teams and is very experienced with the big stage competitions in the International tournament. Invictus Gaming will undoubtedly be the most formidable opponent for Korean representatives, moreover G2 comes from Europe, Taiwan’s Flash Wolves or North American Team Liquid with 2 Korean and ImpactJJs are also rivals the same formidable.

Although MSI is just a friendly tournament between the season that Riot organized, it is certain that any top regional team wishes to win the first international tournament in 2019 to prove their strength as well as bringing honor to the area they represent. The legendary alliance is becoming more competitive than ever before and if Faker and his teammates want to open a SKT era of domination, this will be an opportunity to prove one. Again, they are the strongest team of all time.