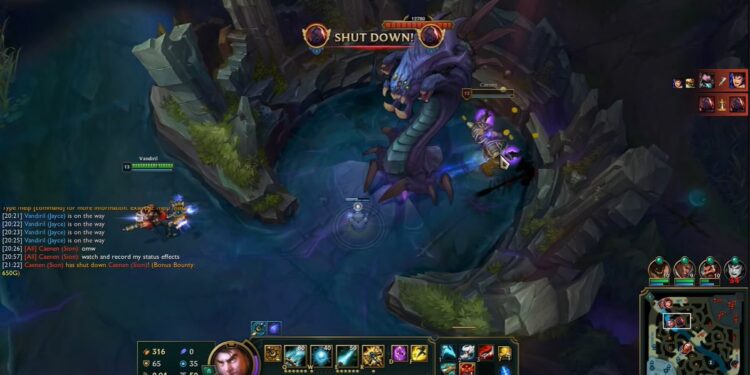 This serious bug is possible only for Jayce and Sion in patch 11.6.

The shutdown mechanism of a fed enemy champion will receive a huge bounty that allows the losing team to have a chance to turn the game around. The player can profit from this self-shutdown bug in which champions can kill themself to get the bounty. Instead of letting your opponent take you down and get that bounty, it makes the fed champion even richer.

Particularly, this error is possible only for Jayce and Sion. Alongside to self-shutdown, it needs “an assist” from Baron Nashor as well. As always, Vandiril has made a detailed clip to describe the bug. The bug requires some form of on-hit damage on Baron, then carefully calculates the damage that must be knocked down by Baron’s 7th attack. Every Baron’s 7 back attack does its AoE stun ability. If Jayce and Sion are taken down at this moment, the player will receive the shutdown bounty from his own bounty.

On the other hand, players have taken advantage of this error cause seriously affection on the game experience. The “self-shutdown” bug enables players to significantly increase their bounty themself that makes the losing team have no chance to overturn by taking the shutdown kills.