According to the LoL community, these champions should be DELETED! 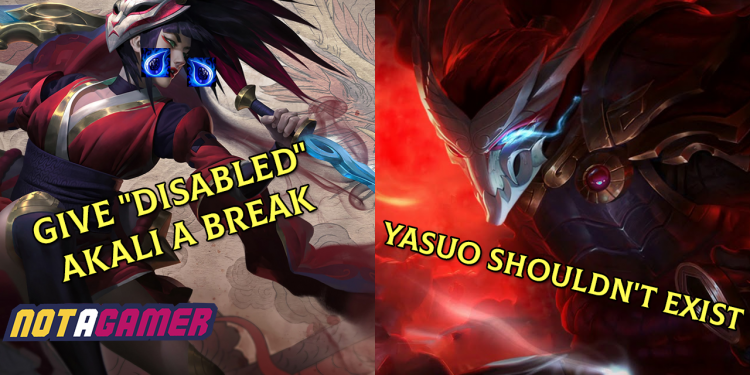 What champions that according to LoL community want to delete? Let’s find out.

Zoe – The Aspect of Twilight

As you probably know, the day Zoe debuted, shortly thereafter that there were nearly 50,000 signatures asking Riot Games to delete this champion.

The Aspect of Twilight had suddenly become a controversial topic in League of Legends community after about nine months since her debut on the official server. According to statistics, more than 49,500 people (at the writing time) wanted Riot to remove Zoe from the Summoner’s Rift.

This topic had stemmed from Change.org, where all the most practical and ridiculous referendum can be posted by any Internet user. Without exception, the “Zoe Hater” community has created a petition to Riot Games with a request to remove Zoe from League of Legends. Zoe Hater did not specify why they wanted to do that; however, according to the attached video, we could see that Zoe has unfair gameplay and is too strong compared to the others, which resulted in imbalance throughout every match.

Since debuting in patch 7.23 in late November 2017, Zoe has proven herself to be a special champion in League of Legends. She can instantly make a “fragile” champion disappear immediately by using only Paddle Star! (Q). Even Lee “Faker” Sang-hyeok, the world’s greatest professional League of Legends player, also admitted that Zoe was “imbalanced” at the time she debuts.

Nevertheless, Zoe, like many other newly released champions in League of Legends – often is very strong in the early patches and is gradually adjusted to not break down the meta-game. After nine months, Riot always paid attention to Zoe and continuously reduced her strength to a radical level – from basic parameters to a “unique” skill set.

These Riot’s move made Zoe only has a win rate of 49.82% – ranked 11/52 among other Mid lanners in the Solo Queue at the Korean server – according to OP.GG. Along with that, Zoe is only the ninth most popular mid lane champion, dropping five places, in the current patch.

Although Zoe has been nerfed throughout time, she still has the flexibility and the ability to deal extremely horrify burst damage, however, players must have practicing and experience before they are able to use this champion effectively in rank.

As one of the most beloved and influential champions of the League of Legends, Yasuo not only possesses a “cool” image, but he also has an extremely “brisk ride” skill set. Besides the mains Yasuo, the LoL community was “sick” with this champion and wanted Riot to remove him from the League of Legends since people who abuse him to test, trolls or pulling others ranking down,…

That’s why when Yasuo debut, he became a hot topic for League of Legends players to talk about and this champion was once again discussed on LoL official forum on Reddit.

“There are 144 champions in the game, yet Yasuo has a 74.3% presence across all elos and regions

The stats are taken from league of graphs. As of right now it’s displaying Yasuo as having a 52.2% ban rate and a 22.1% pick rate. This number does decrease slightly but only in high elo. The reason I’m making this post is because I’m sick of him. I don’t want to ban him every game because I feel like there are stronger and more important picks, but I also know if he isn’t banned then there’s a 1/3 chance he’ll be picked. A champion in this state is not healthy for the game. I don’t believe he’s OP, but I do think he’s obnoxious. When he got ahead he’s unstoppable and when he fell off behind you might think that he is playing on the enemy team. This has been going on nearly constantly since his release. The best metas in my opinion is when Yasuo wasn’t relevant. I just want to play a good game of league of legends, with teamwork and nobody being useless/solo carrying but Yasuo makes that impossible.”

These are extremely “uncomfortable” shares from a player who thinks that Yasuo should not appear in League of Legends.

Though under the post, there are many ideas from other LoL players have explained why Yasuo is so popular:

“He is very popular not just for his kit, but his design is literally the “lone wanderer anime protagonist” which is also like really popular”

“Yasuo’s popularity is never going to go down unless you pretty much remove him from the game.

Riot has confirmed that Yasuo is by far the most popular champion in the game in terms of sales and it’s not even remotely close. He’s head and shoulders above everything.

So the odds of Riot removing their highest earning champion is pretty non-existent…..”

Indeed, Yasuo is a champion with high difficulty that needs a lot of skills and experience to accumulate. Yasuo in the hands of pro players, he will be a terrible force, and vice versa, when you feed for the enemies up to dozen of kills, the game will be extremely difficult (I said it understatement)

In February 2020, a video interviewed by Riot Games asked for player’s opinions from LEC Europe about whether they wanted to buff, nerf or delete something in League of Legends, a lot of opinions were given; but overall, most players want to nerf Lee Sin and remove Akali from the game.

Unsurprisingly when Akali took the lead in the category of surveying champions that should be deleted from the game. She was a “nightmare” of every Top laner or Mid laner who have to face with. Evenly, G2 Jankos has also admitted that he doesn’t want to see this champion again: “I want to remove Akali because I hate this champion. I think that she is too imbalanced for 2 years in a row. I’d really like not to see her ever again in my life. “

Jankos, besides hating Yuumi, is also extremely opposed to Akali and doesn’t want to see her anymore

Riot Games’ nerfs for Akali may not be enough because the pro players still see the potential of this champion and they absolutely want that someday Riot Games can remove her from the game because of her imbalanced.

A champion with so many advantages from having huge damage over time, the ability to hide with Twilight Rough (W) and be able to farm well with Five Point Strike (Q) in any matches, flipping continuously… Akali is a “terror” since she becomes a force with her fantastic skill set, especially when she is used by highly skilled players.

Qiyana – Empress of The Elements

“Queen” Elementalist Qiyana has just arrived at the League of Legends for a few days and has received a lot of attention from large number players of League of Legends community, especially with a visualize skill set at deals a huge of damage and to be one of the most imbalanced champions that Riot has ever made.

Being an extremely “badass” champion at Worlds 2019, Qiyana was seemed to be continuously nerfed but in fact, the Elemental Queen become a powerhouse in Pre-Season 2020. Qiyana takes advantage of the map’s new changes too well when she can easily roam thanks to the acceleration area of Could Drake, more dust from the Ocean Drake enable her mobility increasingly, especially the Ultimate Supreme Display of Talent that makes good use of the walls in the Mountain Drake’s Map.

Qiyana adapted too well to the changes of the League map

Moreover, the addition of new Lethality items makes this hero have more choices in specific matches. For a champion that is “over power” like Qiyana, these beneficial changes only make her become stronger and more deadly.

Being an Assassin, Qiyana takes a lot of benefits from terrains, not only her mobility but also having a large stun skill by (R), indeed Qiyana possesses too many privileges. Even the ultimate’s ability to deal damage and stun is too large and is so easy to use on most terrains of the Summoner’s Rift map makes this skill almost always stunned opponents, help her can easily perform a basic combo that is enough to one-shot the enemies that they could not react in time. Because of this, there has been a wave of support for the removal of Qiyana from League of Legends.

International gamers have shown that Qiyana has a ban/pick ratio with a high win rate and is too difficult to confront, the best way is to rush into the Base. Many gamers also joke that the only way to avoid her Ultimate is to fight in the middle of the Mid lane or in the Base that can safely easy takedown Qiyana.

The red area is where you shouldn’t fight Qiyana, and it takes up 80% of the map space

In this year, Riot Games has released 5 new champions with extremely special mechanisms and their power are hard to predict. Qiyana, Sylas and Yuumi have messed up the professional meta in the previous year, besides there are Senna and Aphelios are also showing good performance in the final patch of the year, at least in the index (Aphelios has a 50.04% win rate with 12% pick, a high number with a new champion).

Despite being so powerful, they also annoy a lot of players and people sometimes wish that one of these champions didn’t exist. And in the latest survey of Invenglobal, a reputable Korean website about League of Legends, about which champion the player wants to remove from the game, the answer is mostly Yuumi.

Invenglobal: “In 2019, there will be 5 new generals being released: Qiyana, Sylas, Senna, Yuumi, Aphelios. If you had to delete 1 champion, what would you choose?”

Gamers have a lot of opinions about all these 5 champions, but the idea of ​​removing Yuumi is the most popular.

I guess it was Yuumi.

Yuumi is not suitable for this game.

Yuumi. Even Sylas, Aphelios, Senna and Qiyana have a more interesting game play than that annoying cat.

Senna or Yuumi. But honestly, I want all five heroes to disappear from the game.

I didn’t hurt anyone but people hated me …

Basically, Yuumi is a pretty good idea of ​​Riot Games with the “sticking” mechanism that is both special and suitable for the shape of a “cat”. However, due to the somewhat lazy gameplay, Yuumi is not very attractive to players. The fact that this cat is completely dependent on the ADC, whom you cling to, also makes her too strong in the solo queue. And of course, when losing rank too much lead to everyone doesn’t like Yuumi.

Yuumi is not a weak champion, only the play style and her skill set causing too much discomfort for both teammates and enemies.