Faker’s Super Cute Expression When He Meets Akali in “real-life”: “Faker’s Acting Is Worth Silver Iv” – Action of Faker 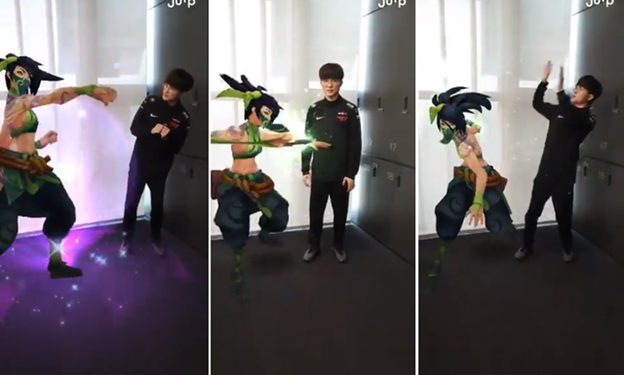 Despite not reaching the level of professional actors, we have to admit  that Faker is very good at… amusing his fans.

“Faker’s acting is worth Silver IV” – Action of Faker

T1 has recently continued to launch a promotional clip for the Samsung brand, and as usual, Faker has an indispensable face. The promoted product this time is a virtual reality simulation app called Jump AR.

This app enables to make the images of the virtual characters in extremely vivid 3D form on the user’s mobile screen. In the promotional clip of T1, Faker met Akali – one of Faker’s “victims”.

In general, Jump AR is not an outbreaking technology product, because the virtual reality trend has appeared for many years, and many other mobile applications have allowed users to interact with virtual characters in similar ways.

Faker: ‘ I don’t even talk to Flash users with D keys’ – Faker Flash F or D

However, the thing that makes this clip be more vivid is Faker’s performance. Firstly,  Faker tended to be extremely surprised when he suddenly saw Akali in the “real life” and then he acted like to avoiding Akali.

But the funny thing is Faker always has his “unique” emotion, he keeps smiling all the time and doesn’t show any other expressions that the “director” requests. It seems like Faker to try his best so hard not to laugh at his acting.

Witnpting the advert that looks very amateur but actually, it is incredibly amusing. After seeing Faker’s acting ability, the fan community commented: “Faker can climb the Challenger in League of Legends, but to grade the acting, we’re not reluctant as the rank… Silver IV. “