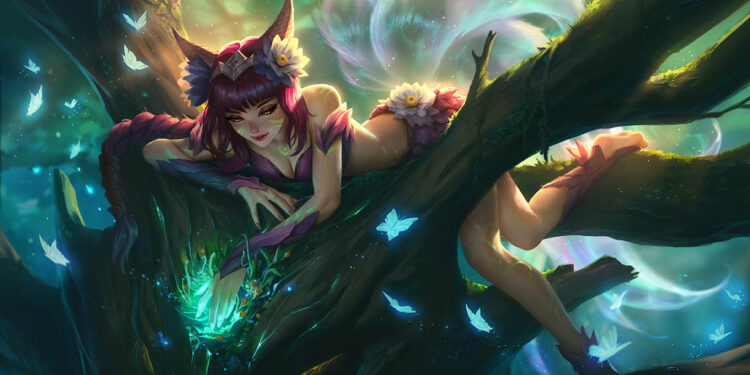 In some ways, Ahri’s mini-rework in League of Legends Season 12 was ambitious, converting the pseudo-assassin mage into a high-mobility, high-sustainability champion. However, it worked, as her win rate and play rate skyrocketed as players are charmed to Ahri in record numbers.

Ahri was a powerhouse of League of Legends‘ mid lane over 10 years ago. Since then, the Nine-Tailed Fox has gradually faded into obscurity as flashy new champions have absorbed her position as the bursty mid lane assassin.

So, with her League Patch 12.3 overhaul, Riot carved out a new niche for Ahri, concentrating down on and clearly defining her high-sustain, high-mobility playstyle. If the stats are any indication, it was a triumph.

This patch, Ahri’s play rate has risen to upwards of 14 percent, a significant increase from the prior 5 percent. Not only that, but her overall victory rate has increased by a couple of percentage points, from roughly 50% to 51.97%. At higher levels, this rises to more than 54%.

While her play rate increase was expected — champions who receive big changes frequently experience a significant boost in the patch following the change — the sheer victory rate increase has come as a surprise.

Since the release of LoL patch 12.3, Ahri has made frequent appearances in professional play. She has participated in ten Academy games in North America, with a win percentage of 70%, whereas Rogue mid-laner Emil ‘Larssen’ Larssen came up short versus Astralis in LEC Spring (4/7/5 in a defeat).

The modifications, which provided the mid-lane mage additional sustain and (conditional) mobility to sprint about in battles, have generally pleased Ahri mains. However, there is considerable dissatisfaction in the community, with some lamenting the loss of the one-combo burst build.

There’s more in store for Ahri gamers as well, with a cosmetic overhaul planned for later in 2022. This features a redesign of the model and VFX on the majority of her skins, as well as Prestige K/DA. As part of the Mythic Essence upgrade, Ahri will receive a new rig.

For the time being, the statistics reveal that the League’s original poster child has reclaimed the Summoner’s Rift crown. According to statistics from op.gg, Ahri has risen to be one of the best picks in League Patch 12.3 and has both her win rate and play rate skyrocket in the last patch., and the Nine-Tailed Fox has found a new home in the League of Legends meta.

Riot has noted that, with the patch, she is hitting all of the bases they were looking for.

“She’s looking pretty strong so far,” developer Ray ‘Ray Yonggi’ Williams said shortly after the patch went online. Riot, on the other hand, has refrained from nerfing her in patch 12.4, instead preferring to hear from Ahri players about how the Nine-Tailed Fox feels.