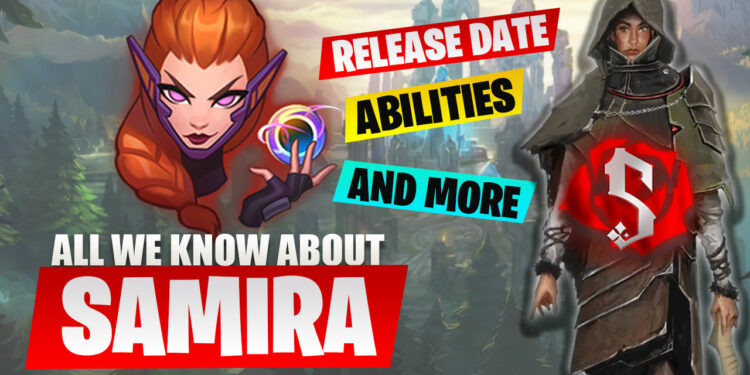 Samira is a promising champion, community hopes she will bring fresh air to Marksman Position.

We will update the post when more information about the champion is either released or leaked. Update: 29/08/2020

Who is Samira? What we have known about Samira?

A batch of files with “SamiraEasterEgg” in their names have been found in the latest PBE cycle, along with the mysterious “S” emote.

Also on the champion road map released on June 2020, Riot Games also teased an “all thrill-seekers” champion. The said character is depicted as “a new marksman, dressed to slay, coming later this year”. Perhaps the gaming company behind League of Legends is trying to revolutionize the bot lane by adding more and more marksmen options. The latest being Senna who also functions as support, and Aphelios whose kit is overly problematic to balance.

The Brazilian content creator who previously leaked a substantial amount of Spirit Blossom content, Streamie, claimed she has seen Samira’s art and abilities. According to her, Samira is not coming to the PBE this week but rather in two weeks (around patch 10.18), and something about Samira is very “jawdropping” and the fact that there is a very specific thing people are wrongly speculating about this potential upcoming champion.

Streamie said that the visual appearance of Samira is a combination of this character design below, along with Cowgirl Miss Fortune, but with less clothes. Also, she mentioned that this supposed 151st champion will be of Shuriman origin, instead of being from Noxus according to recent rumor. While she might be a Shuriman, it should be noted that Noxus has some holdings in Shurima lorewise, so it is possible that this champion is a Shuriman mercenary fighting for the empire.

Streamie said that the visual appearance of Samira is a combination of this character design along with Cowgirl Miss Fortune, but with less clothes

Samira, the Desert Rose, have been spotted on the PBE!

What are Samira’s abilities?

According to a Reddit post from u/Jepeseta who translated Streamie’s leak, Samira has 2 main weapons, a pistol, and a dagger. She also has a machine gun that she uses for her ultimate ability. Her daggers look like Katarina’s but longer. Her attacks alternate between her pistol and dagger.

Samira’s ultimate is “a combination of Katarina’s R, Urgot’s R and Nunu’s R”. She’ll start spinning and shooting bullets from her machine gun as well as throw multiple daggers. Her ultimate will have a “style meter” showing the number of enemy champions hit and killed with the said ability. It has a “rose” motif, the rose has 5 petals and “blooms” when she’s hitting all 5 enemy champions.

Samira has a straight forward kit and will be relatively easy to get familiar with. She looks flashy but she’s not tough to play. She is predicted to be extremely favorable among players, strong and will be Riot’s target for skins release, much like Kai’Sa

She vaguely mentions something about Samira having guns in her shoes but isn’t too specific/clear about it.

[Note: Since this update/push has been wonky, PLEASE be aware the info (and specifically SCALING/Numbers) could very well be incorrect and spells could be out of order! We also can’t get to it in-game to confirm.]

Samira builds a combo by hitting Attacks or abilities unique from the previous hit. Each one increases her Style, from “E” to “S” grade (6 total). Samira gains X% Movement Speed per grade.

Samira’s attacks in melee range deal an additional X magic damage, increased up to X based on the target’s missing Health.

Samira’s Attacks against enemies affected by Immobilizing effects Knock Up for 0.5 seconds and deal damage over 6 separate attacks. Samira dashes into range against targets slightly outside her Attack range.

If this ability is cast towards an enemy in melee range, Samira will instead slash with her sword, dealing X physical damage.

Either hit can critically strike for 25% bonus damage.

If cast during Wild Rush, Samira will strike all enemies in her path upon completion.

Samira slashes around her for 1 second, damaging enemies twice for X physical damage each and destroying any enemy missiles that enter the area.

Samira dashes through an enemy or ally, slashing enemies she passes through and gaining Attack Speed. Killing an enemy champion refreshes this ability’s cooldown.

Samira can only use this ability if her current Style rating is S.

Samira unleashes a torrent of shots from her weapons, wildly shooting all enemies surrounding her 10 times over 2 seconds, each shot dealing X physical damage and applying lifesteal. Each shot can also critically strike.

When is Samira Release to League of Legends?

While we haven’t had any information indicating this new marksman’s release date, we can assume that she will be released “earlier than expected”, possibly around patch 10.19. According the Streamie, she will be available on the PBE server around patch 10.18 PBE cycle.

Why this leak is credible? (also other leaks)

Streamie successfully proved that her PsyOps skin line leak with PsyOps Sona being a legendary skin, as Riot released some teasers yesterday.

Other leaks including a Targon cinematic featuring Leona and Diana, and a new champion called “Seraphine”. From the champion roadmap, it’s heavily implied that after Samira we’re getting a new musical-theme mid lane mage. Seraphine is allegedly that mage.

We will update more information once it is available..

Huge amount of people are reporting to have completed a secret mission that gives the Emote Teaser of the next ADC, Samira The Requirements to complete the Secret Mission, Remain a Mystery so far..

This video appears an effect of Samira : Souce : Consta

DISCLAIMER: Everything about this Samira character, including leaks, pictures, and other forms of information are tentative in nature, and might or might not be true until the official confirmation from Riot Games themselves.