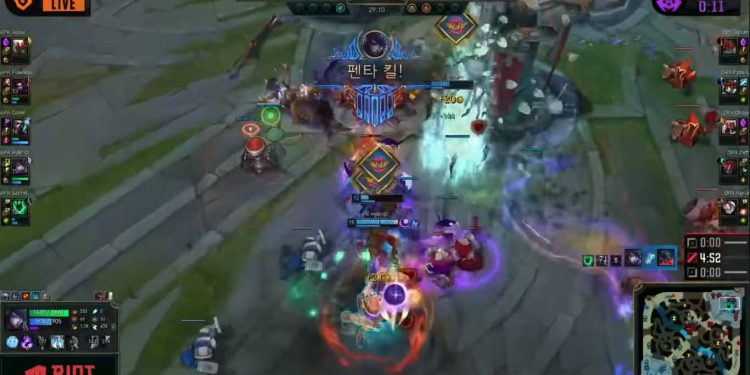 T1 expressed their thanks to the players APK Prince after the team helped Faker and his teammates maintain 2nd place in the LCK rankings.APK players

In the final match of the LCK Spring 2020 group stage, DragonX got a 2-1 victory over APK Prince. However, this is no different than a failure when they have not achieved their important goal, which is to win absolutely 2-0 to occupy the top 2 position in the rankings.

Although DragonX is the team that won the final, it is worth mentioning that APK Prince has given 1 match victory, and this is just enough to prevent DragonX from being able to rise to 2nd place in the rankings, where T1 is occupying.

With the playoffs format, maintaining the 2nd position also means that T1 will only have to play from round 3, and if winning, they will go straight to the finals to meet the Gen.G

So no need to say, the T1 members have become “20-year fans of APK Prince: in the last match. And as expected of the” fans”, APK has had a game 2nd is great to make DragonX unable to win the absolute 2-0 and rise above T1 in terms of the difference of win-lose.

Because of the same difference of 14-4, but DragonX lost T1 in both matches, Faker and his teammates have automatically ranked first thanks to their confrontation.

Immediately after the end of the match between DRX and APK, T1 also made a move to honour the members of this team, with a gift … a box of Lotte ice cream and coupons when … buying T1 shirts:

“To those of you who have won a victory today, a huge box of ice cream branded World Con Faker (Lotte’s ice cream brand that Faker is an advertising model). Ice cream has been shipped now, Remember to eat it quickly or it will melt.

By the way, please give the superstar HyBriD – The winner of Pentakill today, you will receive a 50% discount voucher when you buy T1 souvenir shirts. Love!”

It is not clear how APK members will react to this meaningful gift, maybe they will celebrate by finishing the Faker-branded ice cream box, and for HyBriD, maybe he This guy will have to “ask for a gift” for the other discount voucher because he is playing for APK and going to buy T1 shirts to wear is not reasonable at all.