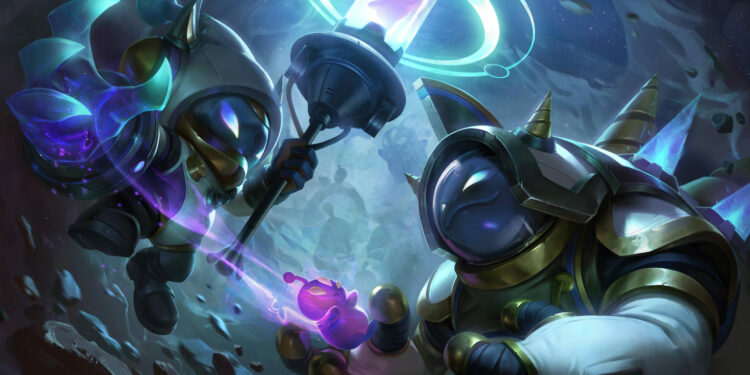 Recently, players have played against Veigar with the skin Astronaut have discovered that this champion stun effect last longer than the visual itself, resulting in a rather weird interaction when the players try to escape the “cage”.

A Reddit user recently uploaded a clip exploiting the skin. In the clip, the Event Horizon cage is seen surrounding the enemies in the footage. To avoid being stunned, the enemies waited until the animation of Event Horizon was over. Then eventually, after the animation had disappeared, the opponent still got stunned when he walked toward outside.

Lee Sin connects with his Q ability, attempting to time the second half of the ability with the walls of Event Horizon disappearing. When he activates the dash, the barriers vanish completely, but he instead runs into an unseen stun wall.

This is a simple instance of the aesthetics not matching the impact of the ability, and it should be easy to avoid with testers and players checking out the skin on the PBE servers. However, in a way, the interaction of this skin has surpassed the PBE without any errors and make it to the live servers, making anyone playing against the Astronaut Veigar skin to be very annoyed.

This isn’t even the first time Riot been exploited for constructing a pay-to-win skin, some similar pay-to-win skins such as DJ Sona with her “immune-CC” mechanic. Perhaps Riot didn’t intent to but some of the “bug” from the code has successfully make their way to the players.

For now, Riot’s devs should look through both of the skin and Veigar one more time to be able to fix the duration of the cage’s motion in the future, allowing players to time their abilities and escapes more properly.