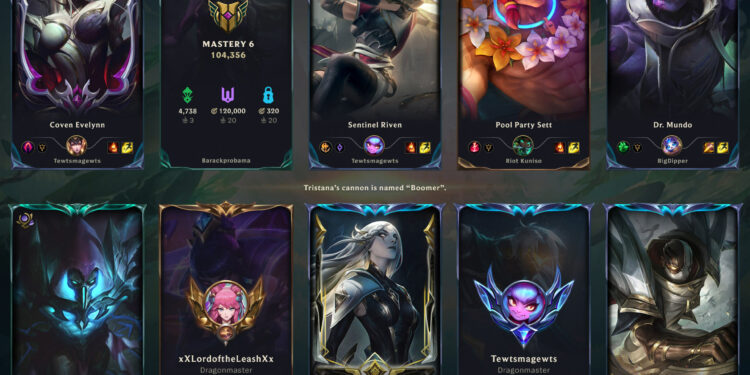 Riot uploaded some brand new pictures about the upcoming changes for the League of Legends’ interface that will be available on the PBE server and is pretty sure that they will appear in the stable client soon. For more information about PBE changes and especially these changes, you can read them in detail here.

Similar to Eternals, they are sets of challenges that players can aim to tackle down alongside their traditional game mode that we’ve been used to. The only difference is that they are global achievements, which means whatever you play, you are still counted. They are split into 5 categories: Imagination, Expertise, Teamwork & Strategy, Veterancy, and Collection.

Firstly, the PBE’s user interface while waiting in the lobby has changed. Instead of a set of armor covering the players’ avatar, they have been changed to be more soft, delightful, and colorful – they named it “Crest”. Additionally, they added the Challenge Crystal – by hovering the cursor at their Summoner Icon, there will be some additional information that you can learn more about their past (their rank, the icon information, and detailed Challenged).

Moving a bit below your player name, display your Title where you can show your bitter-sweet earned Title. The last but not least, the Challenge Tokens which you will be able to show up to 3 icons of your choices. Take these changes as a reward for your dedication and make sure other players will have a better understanding of who you are and what your playstyle is.

The PBE’s loading screen also received a mini revamp. You are now much more distinct than ever! The player cards will contain 3 pieces of information:

One of the biggest changes is the “End of Game” tab. It is now split into 2 tabs. The first one will be used for your personal progression which help you to significantly notice what you have accumulated throughout games.

The second one is a revamp of your traditional End Game tab, but more detailed. They also added some formulas for easier accounting and moved most of the featured from the previous Stats tab into the main tab: