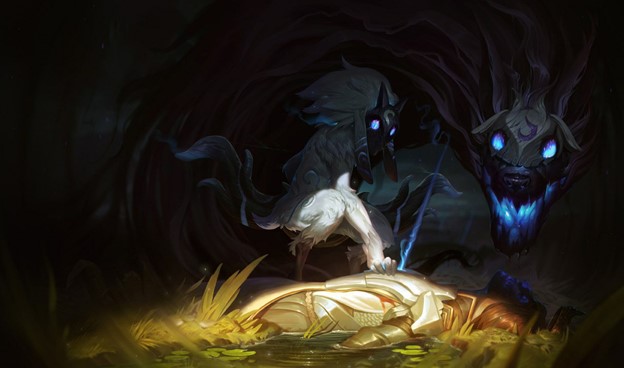 With the introduction of two new items: Anathema’s Chain and Hullbreaker, the community has come up with several new playstyles that can shake things up quite a bit in this League Patch 11.13.

These new builds ultilize the changes implied in League Patch 11.13 at its finest.

Both Yorick and Illaoi has been falling out of the meta since the beginning of Season 11. With the introduction of Hullbreaker, things can be a whole lot different.

Divine Sunderer is still a very effective item at the present, especially when paired with Grasp of the Undying to enable Yorick to sustain in the top lane and deal a lot of Damage in 1v1 or even 1v2 combats. Yorick became a lane pusher and became incredibly strong in Top lane after finishing the mythic equipment and Hullbreaker.
Yorick, with the company of the Demolish and the extremely powerful Shepherd of Souls array, may destroy the opponent’s turret in a moment if it is ignored.

Illaoi’s case is a whole lot different in League Patch 11.13, when played correctly, Illaoi can turn the top lane into a “living hell” where the enemy laner will have no choice but to witness their turrets taken down one by one. If they “dare” to defend it recklessly or call for a gank, winning 1v1 or 1v2 can be surprisingly easy for Illaoi with her Ultimate available.

Another honorable mention champion to pair with Hullbreaker is Sion, as the passive of this item still in effect when he enters his passive mode, which turns him into a feed-to-win machine even scarier and stronger than he ever was in League Patch 11.13. Sion can constantly die and breaking the enemy turret plates for extra gold and rush build the Hullbreaker and continue doing it until he reaches the inhibitor while his enemy laner can’t do anything to stop him.

With the current domination of Tank and Bruiser champions in the meta, Kindred can once again rise as one of the best Jungler when it comes to damage dealing and counter tank. Despite the nerf on range champion for Divine Sunderer in League Patch 11.13, this item is still extremely powerful, especially on Kindred, who has her W damage scale with the enemy max health, and later on, can rush Blade of the Ruined King as the second item for even better damage on tankier targets.

Running Conqueror as the Key Rune, Kindred will become the second ADC of the team, having good mobility, sustain damage over time while also provide her team extra protection from her R, Kindred shines in long-term combat when she can release tons of damage on tankier champion and survive for the whole period of time. As the game goes on, Kindred scales really well with her passive, making her even more of a monster in the later stages of a match.

Teleport has become popular on Jungle champions for several patches, especially in League Patch 11.13, and Viego is one of the best champions when it comes to this playstyle. With mobility from his E, W, and R, Viego doesn’t seem like he depends on Flash too much. Instead, he can utilize Teleport for unexpected ganks and counter-ganks and sweep through any combat that he participates in thanks to his Passive.

Teleport can also open more options for him to become a split-pusher or gaining resources in the enemy jungle while making sure that he can still be there when his team needs him. Conqueror is a must-take for Viego, his build in League Patch 11.13 will normally consist of Divine Sunderer, Blade of the Ruined King, Sterak’s Gage and Death Dance,…

With top lane is now in favor of champions with more damage, Mid lane can step up and take the role of a Tanker//Disabler for the team. Like what we have seen in the past from Sett’s success in mid lane, Ornn or Tahm Kench in League Patch 11.13 can play a very similar role with the help of the newly added Anathema’s Chain.

While adding more crow control effects and pressure on the map, playing Ornn/Tahm Kench mid lane also helps to balance the team out and allows Jungler to gank top or bot more frequently, with Mid lane always under good condition and maintaining control over the centre area of the map throughout the game in League Patch 11.13.

By playing Mid, Ornn/ Tahm Kench’s role is to quickly complete their first Mythic item by safely farm and take advantage of the faster gold and experience gain from mid lane. Once they reach level 6, they can participate in large team combats or take part in counter ganks, invasions and help their team further secure their visions, advantages, and objectives. Both champions can also run Unsealed Spellbook for better Ultily in the game and thus, being harder to predict in the match.

Anathema’s Chain in League Patch 11.13 can be an ideal second item, since it provides an extremely good amount of HP and Ability Haste, while its Active is superb. Not only does it reduce the damage from a chosen enemy, but it can also increase the period of crowd control effect by lower the chosen enemy at the maximum stack, allows Ornn/ Tahm Kench to set up more effective ganks and help their team in hunting down bounty targets on the enemy team.