Top 3 Most Powerful Broken Items That Was Removed by Riot 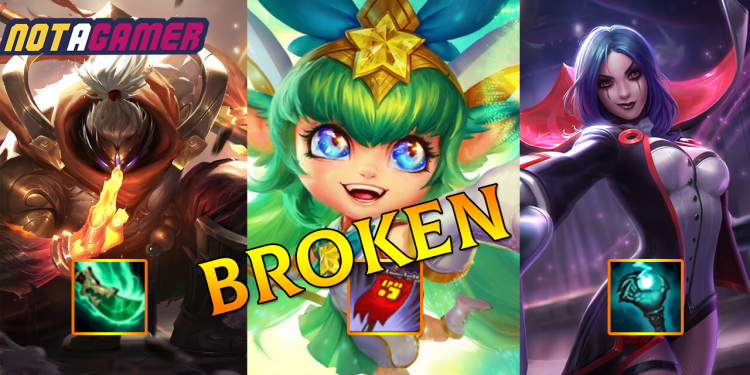 Legends say there was a dark time where you could get one-shot by just a single item or lost the whole game if none of the members of the team purchased it. Let us reminded you of what happened back then when these broken items were still around.

In general, Crowd Control is not a new thing in MOBA, even a few people claimed that Death is the strongest “CC” in a game. Even though this was a joke, history turned out to be different. In those times, your death was decided right from the beginning by Leblanc or Veigar.

The reason to that story is of course Deathfire Grasp. This item granted you tons of ability power, decent cooldown reduction. On top of it, it had a unique skill: Deals 15% of the target champion’s maximum health in magic damage and increase all subsequent magic damage taken by the target by 20% for 4 seconds, also it was a point and click item, it couldn’t be countered by all mean.

Because it was way too broken, Riot decided to remove Deathfire Grasp completely from the game in patch 5.2. It was reworked and slightly modified in Liandry’s Torment.

Banner of Command had been there since LoL was still in beta. Despite being available for so long, BoC had never become a reliable pick for… any champions. In Patch 4.20, Riot gave BoC its unique active: Promote – Greatly increases the power of a lane minion and grants it immunity to magic damage. Since then, BoC became a must-have item for every Supporters, Junglers, and even Top Laners. A team with good macro skills will easily dominate the whole matches. Furthermore, combining Banner of Command with Zz’rot Portal, in the hand of tanky, evasive champions such as Singed and Sion who could create lane pressure and escape easily, it was a deadly combo. After several nerfs applied, Riot finally deleted it in patch 8.12.

Imagine spamming your abilities without having to worry about cooldown and mana. Yes, it is obviously URF Gamemode. Instead of separating between URF and Summoner’s Rift, Riot decided they wanted to merge them together closer than ever. That might be the method of how Spear of Shojin was born. It gave you 50% bonus attack speed, basic attacks refund 20% of your remaining basic abilities cooldown on-attack. Abilities that trigger on-hit effects refund the cooldown on-hit for 6 seconds after casting your ultimate. After SoS added to Summoner’s Rift in patch 9.4, it became the new meta as expected. Every Bruisers, Juggernauts such as Renekton, Jax which was already a monster at that time, became a nightmare with that item. With Spear of Shojin equipped, they instantly became a URF monster with short to none cooldown abilites – lead to a massive amount of crowd control and damage output.

After destroying, savaging for 1 season, Spear of Shojin had been completely removed from both Summoner’s Rift and Howling Abyss.

Learn about the Voice Lines of the next 2 new champions here.