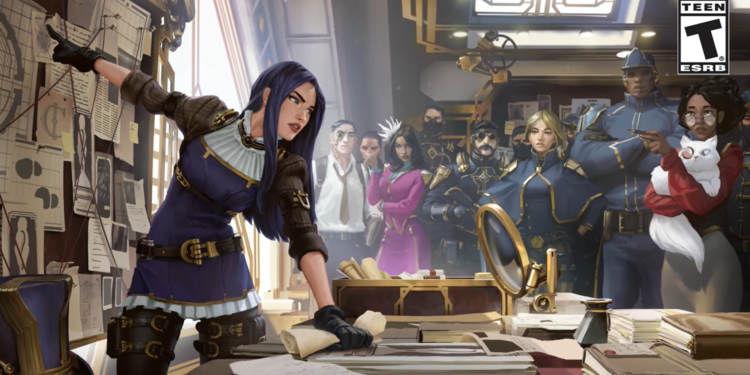 The Sheriff of Piltover – Caitlyn has one of the oldest in-game models in League of Legends.

On August 17, the official YouTube channel of the Legend of Runeterra game officially introduced Caitlyn as the upcoming champion to be added into this card game. Like previous new card introductions, this video gives gamers information such as Caitlyn’s stats, effects, and basic gameplay in Legends of Runeterra.

The Sheriff of Piltover’s stunning new splash art is the centerpiece of the video above. The artwork seems like Caitlyn’s case planning session, and it nicely depicts the character’s title as “Sheriff of Piltover.” The version in Legends of Runeterra outperformed Caitlyn’s current splash art in League of Legends. As a result, the League of Legends community has requested Riot Games to upgrade her image, including incorporating the above splash art in the game.

With a game that has been in progress for more than ten years, such as League of Legends, it is expected that long-standing champions are progressively becoming obsolete in terms of talents and look. As a result, remakes and upgrading effects are critical to making those characters more appealing to gamers and maintaining League of Legends’ diversity.

The Sheriff of Piltover, for example, has seen a significant gameplay change that has made her significantly stronger. Caitlyn’s basic background, on the other hand, did not appear to match the storyline that this character had. No sheriff, in fact, wears a little skirt that reveals her breasts as seductively as Caitlyn’s simple splash image. Riot bringing her splash art and model from Legends of Runeterra into League of Legends would be a huge improvement for this character.