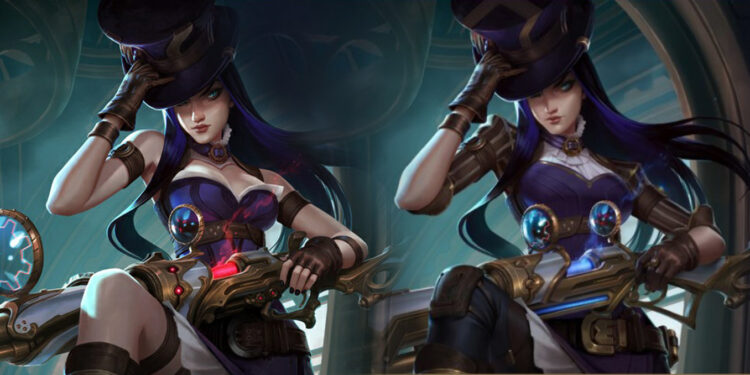 Caitlyn is about to get her long-awaited League of Legends update, which will mostly focus on her “old” in-game visuals.

It has mostly been her gameplay that has been scrutinized by Riot. Caitlyn’s character model, as well as several of her splash artwork, haven’t changed much since she originally appeared on Summoner’s Rift more than a decade ago.

Then recently, Riot Games has secretly updated the Sheriff’s character model in the League of Legends files, as well as her appearance in Teamfight Tactics and Legends of Runeterra, it is possible that her in-game model and her slash art will also be updated in League of Legends too.

Caitlyn’s visual update can be seen in TFT, Legends of Runeterra and Wild Rift

Her first visual update was seen in Legends of Runeterra, with her appearance being more of a sheriff .

Then, A small peek of a visually enhanced Caitlyn is also included in the TFT development update. Her new look in the video ditches her over-the-top wide-brimmed purple top hat and fluffy violet gown. Instead, it trims down her clothing and make it less comical. Caitlyn’s leather leg straps have also been replaced with black stockings, which are admittedly out of place.

Several of these visual modifications may also be seen in Caitlyn’s new Wild Rift artwork, which will be released with the 2.5 update to the mobile game. This wouldn’t be noteworthy since the two games frequently use different graphics — except that the visual update was also discovered in a hidden “Pandora” section in the League of Legends backend files.

The model change is now only available in Teamfight Tactics, but given how similar the two games are, anticipate it to arrive in League of Legends shortly. It’s worth noting that Riot Games hasn’t confirmed anything about Caitlyn or her long-awaited League of Legends update yet, so nothing is 100% will be occur.