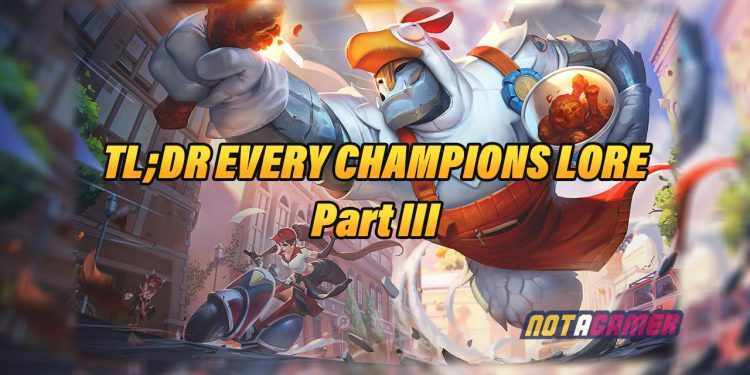 If you already read our previous Champions Lore for Those Who Are Too Lazy to Read [Part 1] and [Part 2], here is the next part of this series!

A giant statue made of petricite, Galio can only come to life when exposed to magic, and protects Demacia from all magical and arcane threats.

A primitive yordle from a long-ago era of the Freljord, Gnar was frozen by True Ice, but has escaped from the ice, and no wanders across the Freljord.

Riot Games: Do you need a minimum rank to work at LoL Analysis team?

A fatass alcoholic with nothing better to do, Gragas searches the Freljord, half naked, for the perfect ale.

An infamous outlaw known for working with Twisted Fate, Garevs was captured and thrown into a Zaun prison, where he wanted nothing more than to break free and exact his revenge on Twisted Fate for leaving him. He has escaped, but the two men have made their peace, and work together again stealing all they can.

Hecarim – The Shadow of War

Originally a warrior from a long-forgotten kingdom, he was overtaken by a lust for power and is partially responsible for Ruination. He was reborn in the Black Mist as a spectral monster, delighting in the slaughtering of the living.

A Yordle who resides in Piltover, Heimerdinger is a scientist and inventor. (That’s honestly it, he doesn’t really have any goals, or that much of a backstory either.)

The prophet of Nagakabouros, Illaoi uses the golden idol that holds her god’s power to test the will and spirit of those around her.

A hero of Ionia for her part in helping defeat the Noxian invaders, Irelia formerly lead other Ionians who believe they should take the fight to Noxus out of revenge, though struggled with the pressures of being a leader. She has since stepped down from the position, but it still viewed as a symbol of the people.

Originally a Freljordian warlord, Ivern’s body and spirit was combined with that of a great mystical tree, and he now roams Runeterra protecting all wildlife.

A wind elemental worshipped by some as a goddess, Janna watched over the seas and protected sailors before being called to Zaun, where she is now a guardian spirit for the downtrodden and hopeless.

Jarvan IV – The Exemplar of Demacia

The King of Demacia, Jarvan had wandered Runeterra, inviting many that his homeland would look down upon to be his companions. Since the death of his father, he has taken his place as king, and it remains to be seen whether he stills holds his more progressive views, or has turned against them.

One of the last surviving people of the lost land of Icathia, Jax wanders Runeterra searching for a worthy opponent, hoping that together they may save Icathia.

Jayce – The Defender of Tomorrow

A promising and skilled hextech inventor, he’s viewed as a hero by those of Piltover, although he himself is ambivalent towards the attention.

A murderous sociopath who believes death to be a form of art, Jhin is currently being used by a cabal of radical Ionian elders, his gruesome art displays a scare tactic to keep would-be foes out of Ionia.

Another murderous sociopath, Jinx regularly creates chaos in Piltover for nothing more than her own amusement, casual violence and explosions being second nature to her.