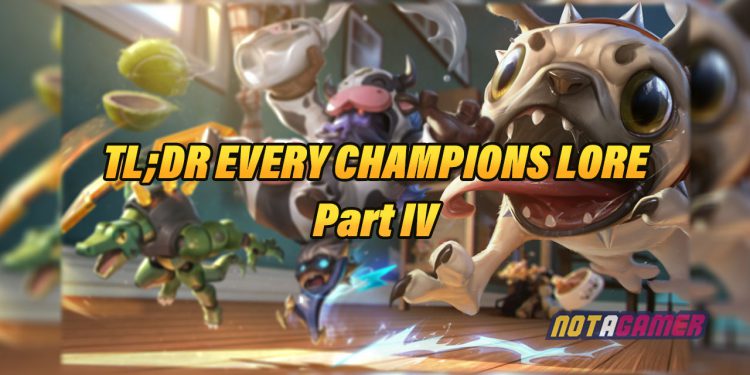 If you already read our previous Champions Lore for Those Who Are Too Lazy to Read [Part 1], [Part 2], and [Part 3] here is the next part of this series!

Here are our TL;DR (Too long; don’t read) Champions Lore as of June 2020. All the champions whose name starts with K:

KAI’SA – Daughter of the Void

A young girl who had fallen into the Void, Kai’sa survived by letting a void-spawn join her body, forming a symbiotic relationship with the creature as it acts as a protective suit. She questions whether she should let the Void take over, or help a world that fears her.

KALISTA – The Spear of Vengeance

A warrior from the same kingdom as Hecarim, Kalista was also killed by the Ruination, but reformed by the Black Mist. She now acts as a spectral assassin of sorts, getting revenge for those who form a pact with her, although their souls are the price.

KARMA – The Enlightened One

The living embodiment of the Great Spirit of Ionia, Karma strives to keep the balance in Ionia, between the traditionalist who seek to return to their peaceful ways, and the radicals who want to bring the fight to Noxus.

A man who saw death as something holy, Karthus ventured to the Shadow Isles to be reborn in the Black Mist, and now brings the treasure of undeath to the living.

A man with nothing to left lose and who lost everything to the Void, he outfitted himself with all the magical relics and artifacts he could, and now fights against it. His himself was also touched by the Void, and uses their own powers against them.

A member of the Noxian noble house of Du Couteau and sister of Cassiopeia, Katarina is an assassin for the Noxian military, and searches for the culprit of her father’s death.

The daughter of the Aspect of Justice, Kayle was the guardian of Demacia for a time, until she decided to try and shed herself of all humanity in order to perceive perfect divine justice.

Yet another murderous sociopath, Kayn is an acolyte of the Order of Shadow, and Zed’s most promising student. Kayn wields a Darkin scythe and hopes to become the next master of the Order.

KENNEN – The Heart of the Tempest

As he matured, Kennen’s energy found no limits and was matched only by his unnerving speed. He was brought to Kinkou as the Heart of the Tempest and is now working with Akali and Shen to enforce the balance of Valoran.

A Void-spawn, Kha’Zix’s goal is to become the apex predator through evolution, evolving every time he slays another beast.

The twin embodiments of death, Kindred roams Runeterra, visiting people in their final moments. Lamb offer a quick, painless death for those who accept death, while Wolf chases and eviscerates those who attempt to run from their end.

The yordle Kled fights for Noxus atop his mount, Skarrl, a rather cowardly lizard, and is a legend among the Noxian military.

KOG’MAW – The Mouth of the Abyss

A Void-spawn, Kog’Maw is still new to the world of Runeterra, and although his intentions aren’t malevolent, he kills and eats everybody in his way as he roams the world.