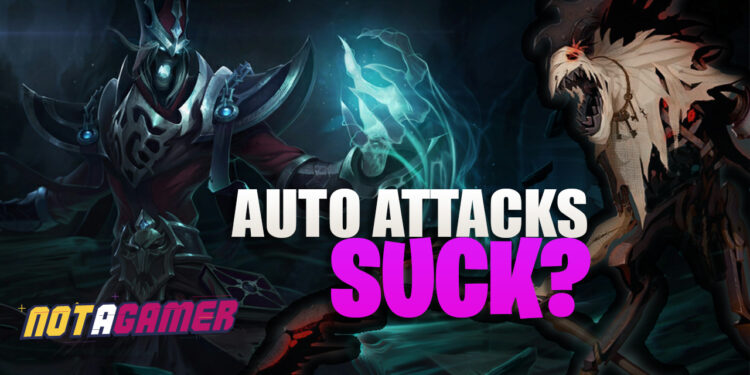 There are some champions who are really bad at dealing damage by auto-attacks in League of Legends. So let’s find out who they are…

Auto-attack is an extremely useful tool which is used to farm as well as deal damage. However, there are many champions not only have slow auto-attacks, but also their damage are not considerable at all! And to compensate those, Riot gave them low-CD skills in order not to make them too weaker than the others. And champions below are what we are talking about:

Despite being one of the oldest champions of LoL, Annie nearly gets nowhere when dealing damage by her auto-attacks. Owning long-ranged auto-attacks, but their damage and speed literally suck as they are quite weak and slow and this lead to her tough farming. Luckily, her Q – Disintegrate, won’t cost any mana if it killed a unit, so that her farming will be much improved. (I’m talking about her auto-attacks, not Tibbers’ xD)

The next one is Fiddlesticks – The Ancient Fear. Although his skills have been reworked, his auto-attacks remain unchange! His auto-attack animation are so sluggish that his last-hits seem quite hard. As a result, bringing him into the jungle appears really reasonable as his speed of clearing the farms is extremely outstanding. Even some professional players said that his auto-attacks are literally useless without Red Buff. If you have mastered the farming skill with Fiddlesticks, I believe that nothing’s gonna make you flinch!!!

Being hit by a banana seems quite painful, but in LoL, Soraka’s “bananas” are absolutely harmless, for real… As a buffing Support, her auto-attacks are not necessary at all as what her team actually needs is HP, not damage! But if we compare to her colleagues’ auto-attacks, like Janna’s or Lulu’s ones, her auto-attack are obviously much weaker. There was a time that Soraka was regularly used as a Toplaner against Brawlers and surprisingly, this playstyle appeared really efficient.

Let’s go back to midlane Mages and Karthus is also included in this list with his sluggish, weak auto-attacks and lacking of mobility. His laning phase is quite simple as players just need to spam his Q – Lay Waste and regenerate mana with E – Defile. And like Fiddlesticks, Karthus is usually brought into the jungle and so far, Karthus Jungle has become a default in LoL.

And the last name today is Anivia. Maybe only Froggen – an Anivia Main or Faker can farm efficiently using her as her auto-attacks are so slow that creeps usually die before they touch them. Even you are a high MMR player, you will definitely have to spend a lot of time to get used to her auto-attacks’ speed. All of these are probably why Anivia has been considered as a hard-to-play champion.