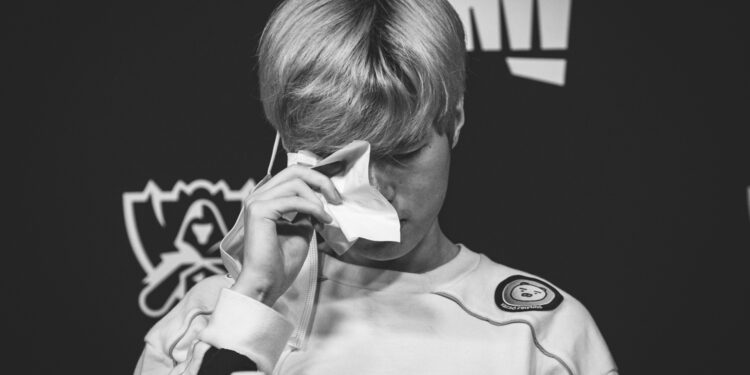 Deft and his team officially stopped their journey at Worlds 2020. Sometimes eSports is not only well-known for its glorious triumph moment of winning champions, but impotent tears also add a huge impact into the color palette of this harsh, brutal world.

After losing 0 – 3 against DAMWON Gaming, the journey of DragonX at Worlds 2020 has finally ended. Even though the outcome of this match is somewhat predictable due to the impeccable strength of DAMWON, but for professional players themselves, this outcome was still a heart-breaking result.

During the interview right after their loss, DragonX Captain/Caller – Deft, couldn’t hold his emotion anymore and shed his tear. He also admitted the reason why DragonX lost was because of his underperformance at Worlds 2020.

“This year, I personally performed disappointingly. My teammates have played really well. I felt regret not achieving our expectations. From the bottom of my heart, I apologize to all of them.”

Deft used to join Worlds representing team Samsung Blue, Edward Gaming, KT Rolster, and his 2020 current roster: DragonX, but his highest achievement he had until now was reaching the Semi-Final in 2014.

In 2014, it was a sad year for Deft. Almost everyone expected he and Samsung Blue would become the Worlds 2014 champion. Unluckily, his team somehow lost 0-3 against their underrated “brother” – Samsung White.

2018 also marked a sad year for our Marksman Player, KT Rolster ended their journey at the Quarter-Final after an intense battle with Invictus Gaming – the champion of Worlds 2018. For a hyper marksman that has received so many expectations like Deft, the fact that he is never able to reach the final match for the glorious trophy is one of his biggest regrets.

Don’t worry, his journey won’t end here. DragonX has many many great young players that can still reach higher peaks. Maybe they will return even more impressive, stronger in the near future, just like how DAMWON team comp is showing.