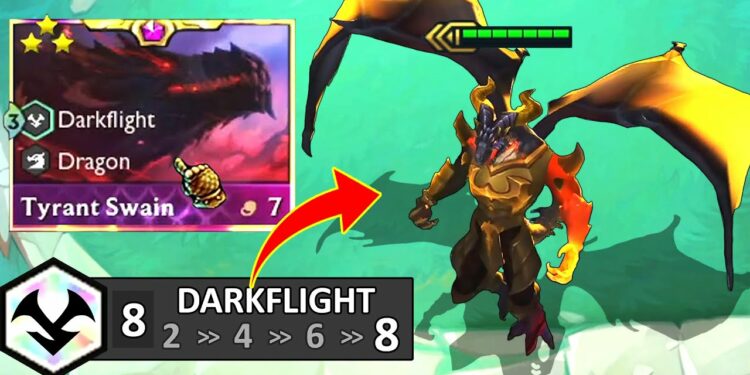 While the early meta in TFT Set 7.5 resembles Set 7 quite a bit, one team configuration is offering a little variety: Darkflight Cannoneers. With TFT Set 7.5, a new characteristic called “Darkflight” was added. It works well with assassins and cannons. Particularly the Cannoneer option has the potential to be one of the greatest comps in the game. This is how you play it.

The most crucial aspect of this Darkflight setup is the item placed on the sacrificial unit (and dispersed to the other Darkflight units). That item should be a Zeke’s Herald. Although there are other good Darkflight item possibilities for Cannoneers, Zeke’s is the best.

Having stated that, B.F. Sword and Recurve Bow are both viable options.

Darkflight Cannoneers can be played in two ways. First, you can re-roll Aphelios to aim for a 3-star rating. Second, instead of pushing levels, you might concentrate on itemizing Graves. You should choose your preferred variation early on because it will affect how you play. If you wish to discover Aphelios, you should re-roll gold on Level 6 to try to find Aphelios 3. To play Graves, attempt to reach Level 8 and find Graves 2 (this is something you’ll want to do later in the Aphelios comp as well).

When it comes to items, make sure you get Zeke’s before focusing on creating any powerful Cannoneer things. Graves and Aphelios have subtle differences, although Quicksilver and Guinsoo’s Rageblade work well on both. Aphelios is vulnerable to Deathblade, and Graves needs Bloodthirster (or another healing item).

Sejuani will be your greatest unit to put the Zeke’s on and sacrifice. Remember, you don’t need to 2-star Sej because she’ll be sacrificed regardless.

Late game Darkflight Cannoneers have a few minor modifications based on augments, items, and the condition of the game. The late-game combo shown below is a highly common and simple-to-build variation.

If you can obtain a Darkflight or Cannoneer insignia, it will be simpler to squeeze in other qualities such as 4 Cannoneers.

The location is the most critical aspect of Darkflight Cannoneers. You’ll want to take advantage of the fact that every Darkflight unit will get the Zeke’s Herald by positioning your carry (Graves or Aphelios) with one Zeke’s on either side of them. With tank equipment like Sunfire Cape and Gargoyle’s Stoneplate, you can solo frontline Hecarim.

After you’ve itemized your carry, you may start looking for supplementary items for other units like Tyrant Swain, who utilizes Ability Power and Tank Items.

As Graves or Aphelios gains a high Attack Speed thanks to Zeke’s Heralds, you’ll see the true strength of Darkflight Cannoneers in the late game. They frequently annihilate the opponent team’s composition in a matter of seconds.