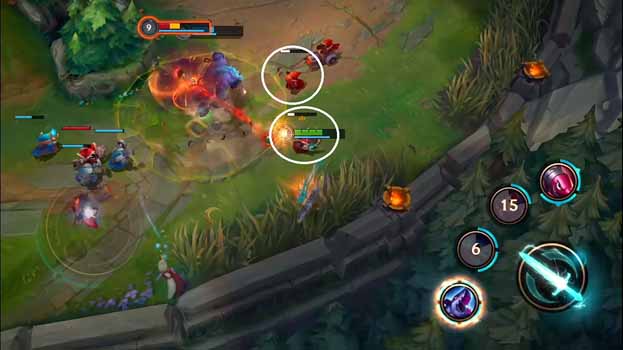 These days, the League of Legends community: Wild Rift has been debating whether this game has the last hit feature or not?

Wild Rift have the last hit

As we all know, the last hit is one of the features that not many MOBA products on the Mobile platform today have. Except for AOG – Arena of Glory has closed the appearance of this feature, the rest, Arena of Valor said no to the last hit.

Last hit, the most obvious explanation is that the player who kills the monster will receive the entire gold. This feature was almost completely removed when MOBA set foot on the mobile platform.

This is explained as to reduce the time of a match to a sufficient level on average from 15 to 20 minutes.

So, when League of Legends: Wild Rift was introduced by Riot Games, many gamers believed that this game would have “hardcore” features that most MOBA products currently on mobile do not have, one of That was the last hit.

League of Legends: Wild Rift, in the released video clips, shows players that the last hit actually exists, even there is a signal for the player to know when it is necessary to launch a decisive move to Earn all gold and experience from minions.

That is, the health bar of minions will turn white when the final attack will kill them

This mechanism helps new players entering League of Legends: Wild Rift to easily recognize what the task they have to perform.

Because last hit is one of the important features in LOL’s gameplay, when you perform the last hit phase, it will give you a complete advantage.

Should Riot Games bring the old Runes and Summoner Mastery back?

However, recently, a gamer proved that LoL: Wild Rift had no last hits, which immediately caused the community looking forward to this game to spark controversy.

Some people think that the last hit is not really suitable for MOBA gameplay on mobile because it will extend the match time, while the source explains that due to the current version of LoL: Wild Rift has not been completed, so the mechanism Gameplay is also somewhat flawed.

If really the last hit does not appear in LoL: Wild Rift, then it will make most gamers feel depressed because this is one of the expected features to distinguish LoL: Wild Rift with MOBA Mobile products other.

In the absence of the last hit, the way to receive gold with experience from monsters is similar to the AOV, players in the designated area will receive gold and experience less than the end of the monster.

However, most likely, the last hit will still appear in League of Legends: Wild Rift because it has been reported that this product was developed to play within 12-15 minutes per match, reducing the maximum time. Time to match the battle on mobile as the level of champions reaching a maximum of 15. Champions can learn ultimate at level 5, the map is narrowed.

The elemental dragon system, jungle monsters, Rift Herald and Baron, remain the same but the two main turrets protect the Nexus and the disappearance of the Inhibitor.

Because the speed of a match in League of Legends: Wild Rift on mobile platforms will be very fast, the additions will also be reduced cooldown, such as Flash reduced to 150 seconds.

It is these factors that allow League of Legends: Wild Rift to reduce game time to an average of 15 – 20 without skipping last hits.

As such, it is highly likely that this feature will still exist in League of Legends: Wild Rift, and the rest still have to wait for Riot Games.