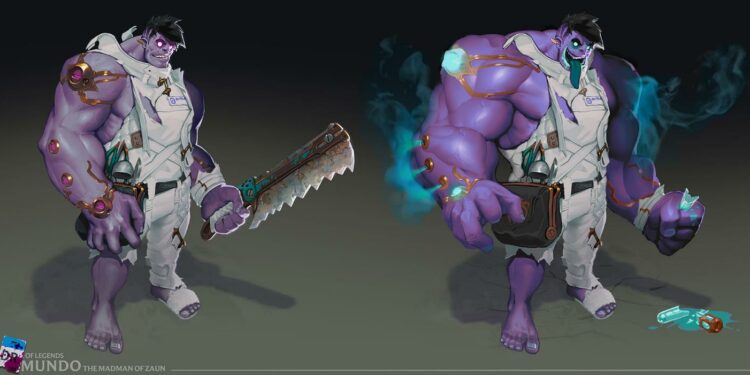 Not too long ago, Riot announced Dr. Mundo’s rework both visually and the gameplay feels. Recently, they gave us a very detailed sneak peek about their plans for this champion.

These are some highlights that are teased about Dr. Mundo – The Madman of Zaun:

Change his appearance and lore so that he can be recognized as a character from the Runeterra universe. Runeterra’s stories are becoming much more nuanced and interesting these recent years, and these needed changes on old champions like Dr.Mundo will make this universe much better.

Dr. Mundo’s signature ability Q – Infected Cleaver and his nature tankiness will stay, but the rest of his kit is expected to be replaced or adjusted.

At first, Riot couldn’t decide whether Mundo was an extraordinary or a maddened one, but they made him into a “funny but dark” type of character. Then they gave him a new look, a much more handsome one.

But there is more than the face when it comes to a better look. They gave him new clothes, those that say something about his past. They decided that this champion’s humor will come from his ridiculousness, emphasizing that this guy can’t feel any physical suffering.

We are not sure if Dr. Mundo will still have his E – Masochism the same as he used to have, but this animation looks extremely cool.

One of the main things to keep in mind about this champion is “physically chemical enhanced”, but the effects must be better than before, the effects of his transformation should scare the hell out of his enemies. How did Riot do it? They rip his shirt off, leaving the pieces flying all over the place, then finally vaporized by the smoke of the substances that enhanced him.

They are even nice enough to release some images of one of his skins after this incredible visual rework.

In a few months, players can try out this new rework on the PBE server, it seems this is the last time Riot will give us any updates on this champion’s rework until his release date.