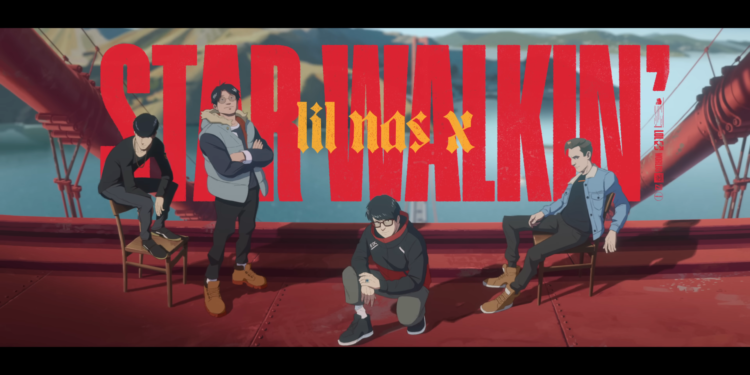 Star Walkin, this year’s much-awaited Worlds 2022 song, was introduced by Riot Games and Lil Nas X, the “President of League of Legends.” Star Walkin’ by Lil Nas X, the official song of this year’s League of Legends Worlds, imagines a fresh take on the Worlds anthem uniting both players and fans in the music video. The video is filled with inside jokes and allusions to professional athletes, local leagues, and their devoted followings.

We wanted this year’s Worlds anthem to have that North American flair while truly embodying the One&Only brand – unapologetic in its individuality. And who better to represent that idea than Lil Nas X?

It should be noted that Team Liquid did not qualify for Worlds 2022 this year. However, Riot Games begins the construction of its Worlds anthem early in the year, and TL seemed certain to qualify at that time because it was a strong contender in NA.

The majority of the segments in the music video feature these four professionals moving around San Francisco’s famous locations. According to Riot, as the professionals walk about the city, “the environment evolves, displaying the sport’s legendary role in culture and the mastery of each player as they leave their mark on the world.”

The four professional athletes and their supporters may be seen in the stands. The spectators can be seen carrying sayings, proverbs, or memorabilia that are emblematic of the pro’s home country or team. One of CoreJJ’s fans can be seen clutching a “ruler” in the photo of him with his supporters, a nod to the 2017 bot lane duo of CoreJJ and Park “Ruler” Jae-hyuk. The famous saying “Everyone else is trash” by Yiliang “Doublelift” Peng is also held by one of the fans.

A secret “Church of Chovy” hashtag can be seen in the group photo for Chovy, a reference to the professional player’s status as the “god” of mid-lane in the LCK league of Korea.

Riot Games used the LEC and Luka “Perkz” Perkovi’s in-game name Uma Jan (a derivative of Uma Noid) as references for Humanoid. The MAD Lions plush toy and the LEC trophy may both be seen in this image, among other elements.

A supporter clutching the previous Summoner’s Cup can be seen standing close to Meiko in the crowd as he wears his Championship ring. A female sitting next to him is wearing cat-themed headgear, which alludes to Meiko’s affection for his cat.

In addition to these, there are numerous images in the music video of fans wearing the jerseys of their preferred athletes and groups, including T1 Faker, Gumayusi, and many others.

The majority of the teams competing in Worlds 2022 are represented by their logos in the opening scene of the Star Walkin music video.

The scene in the video where League of Legends champions are transformed into enormous mechs by the pros is its high point. Azir (Chovy), Rell (CoreJJ), Thresh (Meiko), and Twisted Fate are the winners (Humanoid).

The anthem of 2022 The World Championship begins on September 29th, and Star Walkin has gotten the players and fans pumped up just in time.