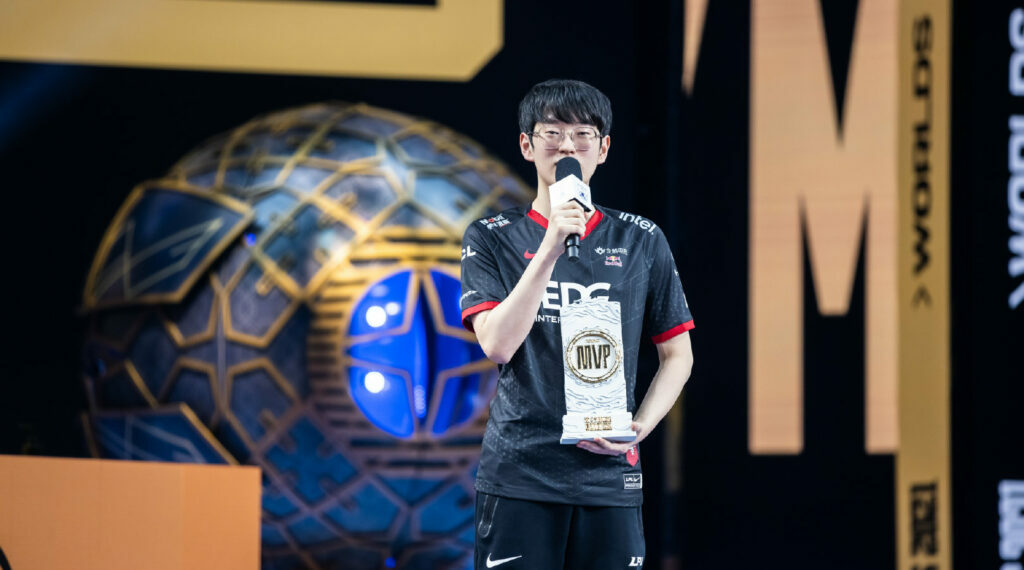 After a 3–2 win over DWG KIA, EDG’s mid lane player Lee “Scout” Ye-chan was selected as the MVP of the 2021 Worlds Finals. The MVP awarded to Scout is really deserved when he has played extremely stable in the past matches of EDG.

Scout has come a long way in his professional career, starting at the T1 training camp. He did not have much chance to play when he was still playing for SKT T1 since Faker was at the pinnacle of his career at the moment.

Scout joined Edward Gaming in the 2016 season and has quickly established himself as a valuable member of the team. And for the first time reaching the final of a Worlds Championship, EDG also became the first LPL team to win both MSI and Worlds.

Speaking at the 2021 Worlds Championship, Scout said he was happy to have “avenged” Faker since Faker has aided Scout in his development as a player for EDG. Scout’s motivation for playing Ryze came from Faker as well.

In his post-match press conference, Scout also admitted that Faker was the ideal role model he was aiming for: “I was pretty upset when Faker lost to ShowMaker in the semifinals. So I really wanted to win the last match to get revenge for him.”

As a result, the LPL once again dominated the competition, with EDG emerging as the new Worlds 2021 champion. Scout, on the other hand, has established himself as the MVP of the match and he has proven his strength on the international stage.