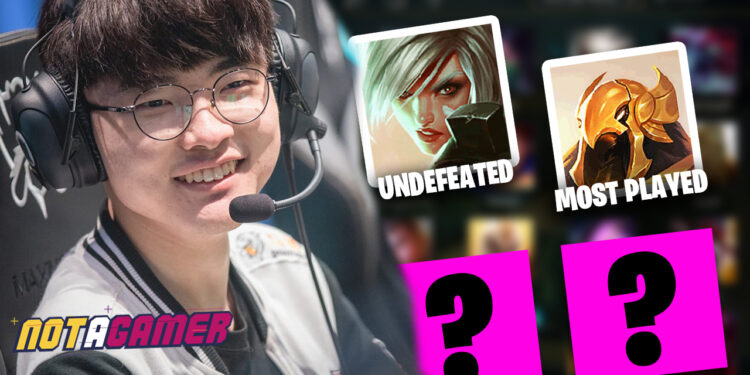 All throughout sports there is at least one figure who people point at and say that person is the best. For the past 7 years in League of Legends that person is Faker. In this post i’m not gonna say why Faker is the best, i want to look into his champion records, specifically everything to do with the champion he decides to choose in his pro career.

Faker has played a total 858 (by the time creating this post) and has used 70 unique champions. Instead of breaking down each champions individually, i will break down in to 7 categories.

One of the most exciting thing in League of Legends. LCK Spring 2015, Faker locked in Leblanc and got his first ever and the only Pentakill. Faker, a person who known as the best has only Pentakill after 858 games played for Pro League of Legends; of course this is pentakill in competitive professional game, not included penta in rank game. This is “Pro” league, not “Rank” league.

That was not an excuse for Faker low pentakill count, here’s how Faker penta’s record stand in comparison with other well-known pro player. Rekkles for instance, a popular ad carry and the face of fnatic he has 9 pentakills in his pro career.

The player who holds the record of most pentakills in professional play goes to Doublelift with 10 penta in total.

Faker to be sop often called the greatest leeague of legends player. He have to wins more than he loses Faker career win-loss record is 583 victories and 275 defeats, his average winrate is 67.9%. Victories come from champion that he has never lost on

Although Faker got his 100% WR with Olaf and Poppy, he got victories and never played them ever again. Of course playing a champion only 1 time and being undefeated aren’t too crazy.

Faker highest victories record comes from Riven, he picked her 6 times and victory every single time.

Everything must have a flipside, not champions Faker has picked have positive Winrate, there are some champions with 0% WR.

Faker has exactly 7 champions that he has only played 1 time and lost them all, after that he has never played them ever again. When Faker gave you a chance to prove your self but you failed him and never got that shot ever again.

EXEPT for Swain, Faker has picked Swain in 3 instances, despite Swain has 3 different shots to prove himself, all of these games resulted in defeats.

I should mention that Zed maybe not his unstoppable champion, but Zed holds Faker’s highest winrate with 91.7% WR.

Faker has win World 3 times, he chose Zed, Ryze and Syndra as honor for his victories. Only Ryze’s in his top 10 most played champions. Although having such an iconic played with Zed, Ryze or Leblanc (especially Zed, “What was that” memes are eternal), Faker most played champion actually is Azir.

Coming right behind Azir is Oriana with 63 games, 40 wins and 23 losses.

The most kills Faker got in a competitive game was 15, with the champion Leblanc. In a Bo5 match of 2015 Spring playoffs. Here’s the whole gameplay, i could’t find any highlight of this match, sorry.

Honestly, most of us got 8 deaths in average :(((, why did i even write this post, it made me sad.

January 20th 2018, SKT T1 played against Jin Air Green Wings and this game together they set the world record for the longest League of Legends pro match. This game lasted 1 hour and 35 minutes.

In this game Faker was playing as Kassadin. During those 95 minutes was able to get 835 CS.

This game was unfortunatly was a defeat for SKT and Faker CS is kind of the reason for their lost. Over 800 CS that’s mean you don’t have to farm anymore or atleast not doing any risky wave clear. But while his team assembled up at minute 93, Faker was solo farming at botlane and got caught. Actually, there are two reason why SKT lost that game, one was Faker CS as i mention, two was Faker bad recall after CS.

Imagine being lost after a 95 minutes game. Next time, if you making a bad recall, just excuse that i learned it from Faker.

The idea originally created by Nicolai so give him a praise.