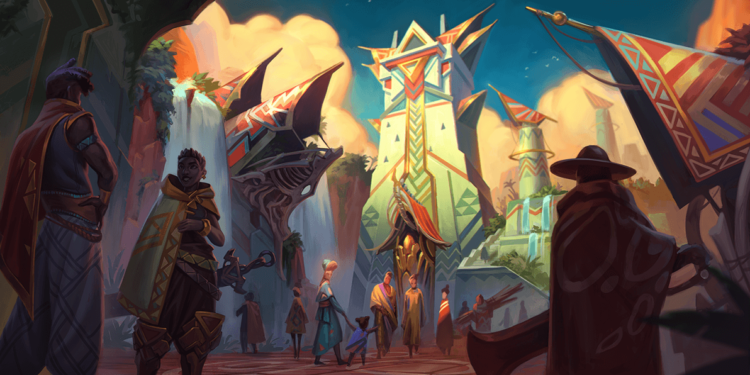 Riot has revealed the first details on the Pride of Nazumah, the champion that is intended to shake up the meta with a high-skill twist in League of Legends Season 12. Here’s all we know about Champion 162, including their abilities and expected release date.

Riot is expanding the League of Legends champion roster in Season 12. The first was Zeri, an ability-centric (kind of) AD carry, followed by the commanding Renata Glasc, who put a new twist on the enchanter support role.

It’s only fair that tanks get some attention with a void jungler and another marksman in town. Riot is accomplishing just that with the Pride of Nazumah, the hero renowned for the recently unveiled Shurima region.

Here is all we know about League of Legends’ Pride of Nazumah — Champion 165 — including leaked abilities and a release date.

In April’s roadmap, Lead Champion Producer Ryan ‘Reav3’ Mireles defined the Pride of Nazumah as a “new high skill top lane tank from a region of Shurima that hasn’t been seen yet.”

“We looked at our tank roster and realized we didn’t have like an Aphelios, Azir, or Yasuo of top lane tanks. They are medium to low skill and complexity,” he stated on Reddit.

“The goal with this champ was to add a high skill/high complexity tank to the roster finally. Something that players that like that kind of stuff can really sink their teeth in and master over hundreds of games.”

Concerns have been raised that a high level tank will be difficult to balance around pro play. Riot is attempting to assuage such doubts with some strategic balance decisions.

Developer Daniel ‘Maxw3ll’ Emmons, who is leading the way with the Pride of Nazumah, noted that they’d be a little more needy than other top lane tanks — which may frequently be outgunned with minimal gold yet still be useful in battle.

“The current roster of tanks tend to have fairly easy to figure out patterns and approach fights in similar ways. Our goal with this character is to create a tank who appeals to players who like deep mastery curves and characters who really test your ability to approach fights in clever ways.

“I don’t want to get into specifics since we’re still pretty far out and not everything is sorted yet, but generally, we’re looking at making sure they’re more gold reliant than other tanks, who tend to still be successful when playing weak side.”

It remains to be known how their kit will function, but for those wishing to add additional flare to their gameplay while also being nearly unkillable, the Pride of Nazumah will be exactly up your alley.

Riot has revealed that the Pride of Nazumah, the 162nd champion in League of Legends, will be introduced later in Season 12. However, a specific patch and release date are not yet known.

Until then, players can look forward to two forthcoming champion releases as well as three reworks for Udyr, Skarner, and Aurelion Sol. We’ll keep you informed when more information on the Pride of Nazumah becomes available.