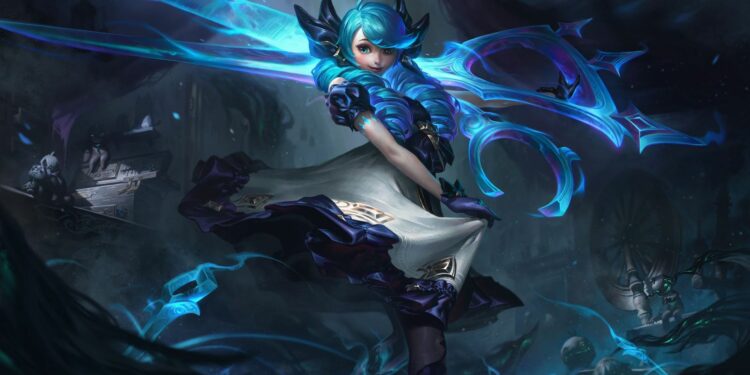 The new champion, Gwen, is the next name after King of the Ruined Viego entering the Justice League. Carrying the soul that many speculate is that of Isolde – Viego’s wife, the Hallowed Seamstress is introduced to be an AP fighter in the top lane with mobility and good damage ability.

As the champion deals good damage through skill exchanges, Conquer is a good match for her. In particular, this gem also combines well with A Thousand Cut passive, Gwen will have a strong healing ability to make the lane easier.

The other gems in the branch that are quite effective are Triumph to add health regen and improve farming, Legend: Tenacity to increase rigidity. The Coup de Grace helps the ultimate Needlework deals bonus damage to enemy champions in addition to the slow.

In the sub-branch, since she is a champion with AP, it makes sense to use Sorcery. Nimbus Cloak increases Gwen’s mobility while Transcendence helps Gwen reduce cooldown and increase AP for this champion.

As a Fighter champion with a good AP and a built-in healing skill, the two current siege items, the Everfrost and Cosmic Drive, are perfect for Gwen. Other items, depending on the situation, should mainly provide this girl with the ability to deal damage as well as reduce cooldown: Nashor’s Tooth, Lich Bane, Morellonomicon. Some items that help she last longer in combat like Banshee’s Veil, Zhonnya’s Hourglass will also be effective, especially in the mid and late game.

In the early game, she is easy to see weaker than the top lane generals with lots of damage and control such as Renekton, Darius … Therefore, avoiding the exchange phase and being ganked is a prerequisite at the stage. Despite the W – Hallowed Mist that both envelops herself and increases armor and magic resistance, remember, Gwen’s health compared to the other champion is still not too much, and lacking equipment will lead to being easily manipulated or stacked damage to death.

Gwen’s strength comes from her Q – Snip Snip, snipping 6 hits dealing magic damage on the opponent or minions, and true damage to the units in the center. However, E – Skip ‘N Splash and Q will only maximize their power if they have 4 stats, collecting from attack to enemy units.

Another advantage of Gwen is that her E attack continuously reduction thanks to basic attacks. The AP fighter can deal more damage in fights, and in addition, this ability is also effective if you need to chase or gank an opponent when combined with R, Needlework.

Gwen is an AP fighter champion with a good set of burst damage skills and quite maneuverable as well as skilled to help the doll avoid ganks or too fast bursts of damage from the opponent. However, Gwen did not seem to outperform some of the commonly used hot names such as Renekton, Darius, or Camille … Not to mention, except for the ultimate that causes slow effects, she doesn’t have any ability to keep her opponent that leads to very hard to organize effective ganks with Jungler.