Ezreal continues to become the best ADC in League Patch 11.12 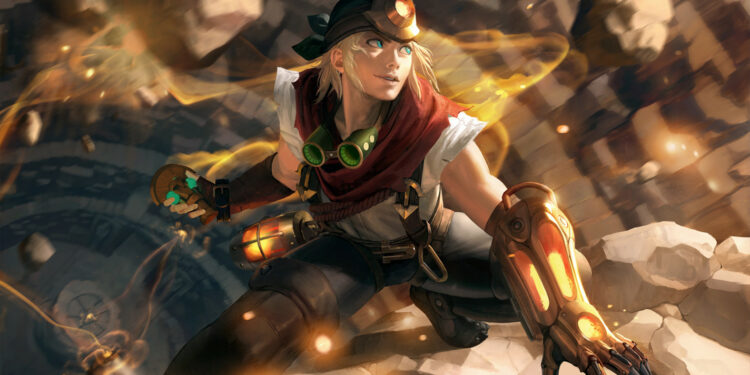 Ezreal is currently the highest pick rate ADC in the game.

There’s an unspoken rule in League of Legends: champions with many skill shots in their ability kit won’t be as successful as their counterparts. Ezreal, since his release has been listed in this category with both his old kit and the newest one are all having 3 skill shot abilities. While the pick rate of this champion is always decent, even dominance in some specific regions such as the KR server, his win rate has consistently been around 46-47 percent.

However, things have drastically changed since Patch 11.11, after the buff for Divine Sunderer led to a magical leap for The Explorer with both his pick rate and win rate soared up to as the best ADC of the Patch. Even with version 11.12 released, other indicators such as Ezreal’s ban/pick rate became unbelievably high. Specifically, Ezreal has a 37.9% pick rate and 26.3% ban rate, and a win rate of 51.86% according to U.gg. What made The Explorer suddenly become the best champion of the Patch?

To answer this question, we need to go back to Patch 11.11 when Ezreal received 2 stat buffs that are very important to any ADC champion: Level-based HP recovery and basic armor. This power-up has allowed Ezreal’s ability to hold and trade in lane become so much better. Besides, he also became tougher in the middle of the match by building Frozen Heart as a third item.

Despite this, in Patch 11.11, he only stopped at a good champion, not as the top-tier pick he is now. It was just until Patch 11.12 came out and Riot nerf both Varus and Kai’Sa that The Explorer had his chance to shine. Basically, Varus and Kai’Sa are champions that capable of overcoming Ezreal extremely well from both laning phrase and team fights. With all his heavy counters on the nerf list, the champion took the chance to shine.

Gamers also realized that picking Ezreal will overcome the entrenched weakness of every ADCs: too squishy and vulnerable against Assasins. Usually, the ADCs will have to focus a lot on damaging items while do not possess any defensive stats, especially in the middle stages of the game. However, Ezreal is able to protect himself quite effectively with items such as Divine Sunderer, Frozen Heart, when the amount of bonus HP and armor from these items are extremely impressive.

Not stopping at increasing the amount of HP, the Divine Sunderer also gives Ezreal both magic and armor penetration stats from its Mythic passive. These stats interact very well with his kits since Ezreal can deal a huge amount of mixed damage thanks to his W and R. Therefore, The Explorer has completely outclassed all his fellow ADCs due to having not only better damage but also higher chance of survivability in combats.

Being the best pick in Patch 11.12, he might be considered for a nerf in the following patches. If you want to find a good ADC with both decent damage and high survivability in combats, Ezreal is the best pick for you in Patch 11.12. What do you think about this champion? Leave a comment and let us know!