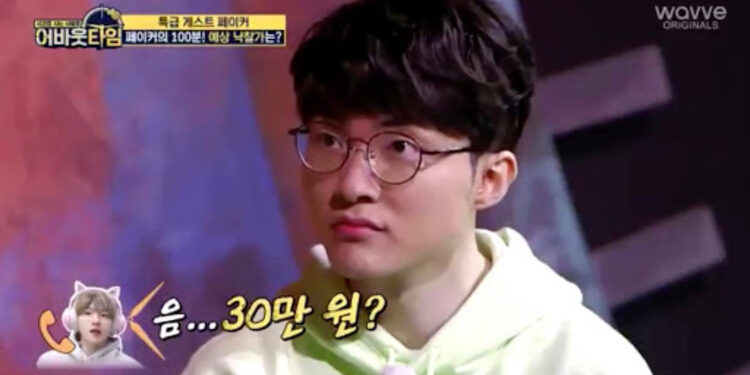 The “milking” treatment that T1 applied on Faker did not seem to have any changes soon.

At the end of the 2021 Spring Split with the final top 4, fans thought that Faker and his teammates should have had a relatively good resting period to ready things up before entering their upcoming summer split as the team did not qualified for the 2021 MSI.

However, the League community has recently discovered that T1 continues to “backslid” when they brought Faker to many entertainment shows and advertising campaigns. It would not be worth mentioning if the fans did not find out that Faker himself was also implicitly “calling for help” because of his recent tiresome schedule.

“- Gumayusi: Where are you now? – Faker: I’m going to film the show.” – The chatbox between Faker and Gumayusi revealed Faker’s work schedule

On Ellim’s latest stream, Faker suddenly sent a very confusing message to his younger brother. When Ellim asked what was going on, the T1’s captain did not respond anything, he simply smiled it away.

And it was not difficult for Korean gamers to discover the code contains the letters “tkffuwnj” sent by Faker actually correspond to the positions of the Korean letters on the keyboard, which typing will be “살려줘” (short for “살려 주세요” which means “help me”). This very transcription had made those who love this player uncomfortable as he must be extremely tired to call for help. But he was too afraid of affecting the company, that’s why he had to use this “code” to express his feelings.

Since SKT T1 changed its name to T1 and the SKT corporation handed over the management of the team to its partner, the most prestigious eSports organization got caught in waves of fan protests around their “businesses”.

In the past 1 year, Faker almost did not have any time to rest between the LCK seasons, although T1 was absent in the last 3 international tournaments. Most recently, he was confirmed to have completed the filming schedule of an unknown show at Onlive Plus studio with Cuzz and Keria.

In fact, other T1 members also participate in advertising, and image promotion is also a common thing for eSports organizations. Nevertheless, Faker is still the one with one of the densest advertising schedules thanks to his famous career. Many people believe that at the age of him, it is true that he should “take advantage of” making money since his peak period will not last long. But with the aforementioned moves, it is clear that filming ads or participating in non-professional activities is not his desire. The lack of rest in the period between the two seasons will definitely affect his morale and performance.

Moreover, Chinese and Korean fan communities are also calling on Faker to leave T1 if this situation continues. His professional contract will conclude nominally by the end of the year. It is said that that his contract with T1 is still binding, and as a “golden hen”, this team will definitely not let him leave with ease. Even if the Demon King ended the contract, T1 can also use legal measures to hold him back.