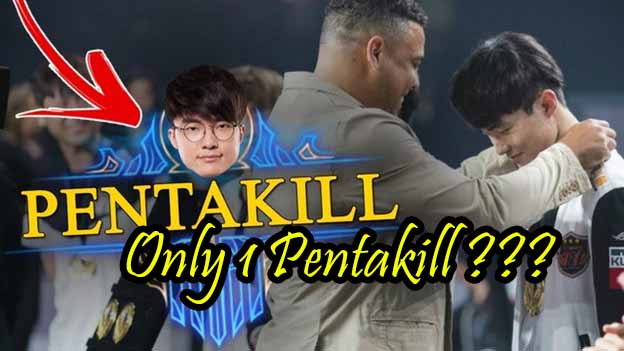 Faker Pentakill – Recently, during the LCK postponement due to the COVID-19 epidemic, data and statistics analysts did not miss the opportunity to look back on the great career path of Faker – Player has just reached the 2000 kills at the LCK tournament not so long ago.

Gosu.ai collected data provided from Riot to outline an overview of the impressive statistics of the Faker’s career, and by looking at it, we will probably discover a lot of things. exciting.

Firstly, in terms of kills, in every arena, Faker has more than 3118 kills, meaning that besides the 2000 kills in the LCK, he is also a rare name that won more than 1,000 kills in the other international leagues.

However, it is worth mentioning that out of the more than 3,000 kills made after those 7 years of professional play, only once, Faker got Pentakill. It was during the match against NaJin e-mFire ​​on January 8, 2015.

It was a match that Faker used Leblanc, and even his opponent – NaJin players were determined not to let the Demon King get Pentakill when Kalista refused to go out to clean up minions, then with a battle, Faker still easily managed to destroy the remaining of the opponent, bringing the first Pentakill phase after 2 years of professional play, and also his only Pentakill to date.

If you don’t play AD carry, your ability to have Pentakill in a professional tournament will be much lower, which is understandable, but Faker can only win a single Pentakill in every arena. It is unbelievable.

However, if you are a Faker fan and understand your game well, then this statistic is very easy to explain. The champions that Faker uses most effectively throughout his career are the ones who tend to control, not too strong in accumulating damage and hunting the enemy.

Faker is known as a “carry” but in reality Faker always plays with the spirit of supporting his teammates and trying to set up a good fight, so that the ADC has the opportunity to discharge damage, rather than doing it himself.

And of course, having a single Pentakill (in the professional arena) will not diminish Faker’s greatness, maybe this is just an interesting statistic.