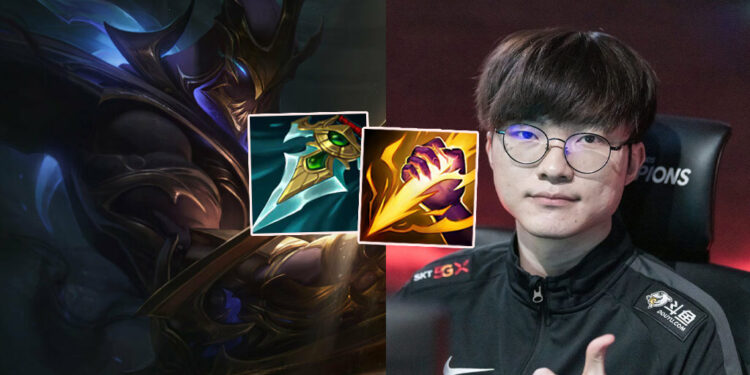 Faker has built a reputation for himself with a variety of champions, from LeBlanc to Ryze, Riven… yet when it comes to the most memorable champion, only Zed stands out.

In addition to the historic solo 1vs1 with Ryu, Zed is one of the champions that Faker relied on heavily in the early phases of his career, and owing to this champion, he reached ultimate triumph till these days.

Despite the fact that the chance of playing Zed is so low, especially in competitive and high-elo, fans are always eager to watch. Recently, the Demon King suddenly picked Zed jungle in a ranked match on his stream. It goes without saying that the amount of views on Faker’s channel has sky rocketed. Everyone is curious to see what Faker can do with the new Zed jungle.

Faker plays Zed in the jungle

This test, however, does not appear to be very successful. Despite the fact that Zed has been adjusted to fit in the role, this champion is still rather poor. Faker had to work hard to finish the first jungle rounds, and because Zed doesn’t have any strong controls, Faker’s early ganking potential is practically non-existent.

Eventually, Faker had a KDA of only 4/11/10 when the game has been finished. Quite a feed, though he also has some contributions to teamfights and some amazing outplays.

In a situation where he moved to the top lane, Faker was caught up by three enemy players. A succession of attacks was fired, causing hishealth to plummet to critically low, then, with only a small amount of health, he can still secure a kill against a full HP Jarvan IV. Even with just a little help from Senna’s ultimate, Jarvan IV, Rumble, and Pantheon on the other team couldn’t even stop him.

The circumstance of his impressive outplay led over 400,000 viewers to continually shout in surprise, as they saw the image and attributes of a top Esports player handing very calmly in a disadvantageous situation.

It’s worth noting that, despite the Demon King’s feed to 4/11, his team was the eventual winner. Even though the result of his KDA was poorly, he still delivered an amazing performance of Zed jungle to fans.