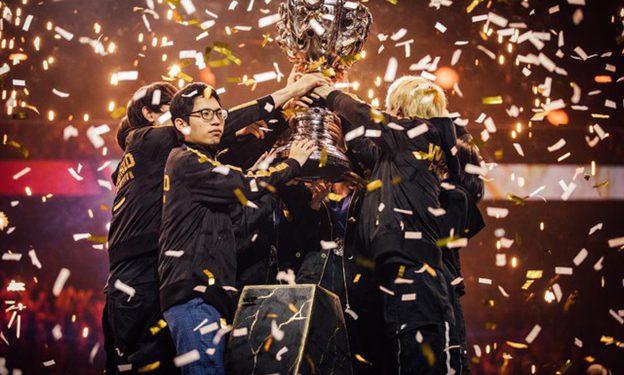 Although only a fan-art, the FPX costume group designed by Chinese gamers still makes many people confuse that this is Riot’s genuine goods.

As the owner of the 2019 League of Legends World Championship, FunPlus Phoenix will receive a reward from Riot Games with the World skins for all 5 players.

As expected, the genuine FPX costumes from Riot will be released in May, but to the Chinese League of Legends community, they seem to have waited too long to witness the event appearance of the 2nd Worlds skin line in history belongs to the LPL area.

So a Chinese artist with the stage name Mantiscorbis recently designed the World Championship skin for FPX, and it is worth mentioning that, even though it is fanmade, Mantiscorbis’s work is intentional  Extremely unique idea with great image quality.

If not for the list of champions in this work is a little different from the official announcement from Riot (Lee Sin, Malphite was replaced by Qiyana and Nautilus), many gamers have mistakenly thought this is a picture photo of formal attire leaked from Riot.

On 20 December 2017, FunPlus’ esports division announced the creation of FunPlus Phoenix (FPX) and its acquisition of a spot in the League of Legends Pro League (LPL). FPX’s inaugural roster consisted of top laner Kim “GimGoon” Han-saem, jungler Hu “Pepper” Zhi-Wei, mid laner Feng “bing” Jin-Wei, bot laner Lin “Lwx” Wei-Xiang, and support Liu “Crisp” Qing-Song. The team’s first tournament was the Demacia Championship 2017, which they placed 9th–15th after losing to Team WE in the third and final round of Group E.

For the 2018 LPL Spring regular season, FPX was placed in the league’s western conference. Despite adding veteran mid laner Yu “Cool” Jia-Jun, FPX finished 5th in their conference with a 9–10 record and did not qualify for playoffs. Chen “Alex” Yu-Ming replaced Pepper as the team’s primary jungler for the 2018 LPL Summer regular season. FPX finished 4th in their conference with an 8–11 record, qualifying for playoffs as one of the bottom seeds. They were promptly defeated by JD Gaming in the first round..

On November 30, 2019, FPX won the award for “best team” at the 2019 China LoL of the Year Awards, held during the LPL All-Star event. In preparation for the 2020 spring season, several additions were made to FPX’s roster: Two-time LCK champion Kim “Khan” Dong-ha joined from SKT T1, while three players were promoted from FPX’s academy team.

More: 4 mini-games of League of Legends that help you improve your level – lol dodge game