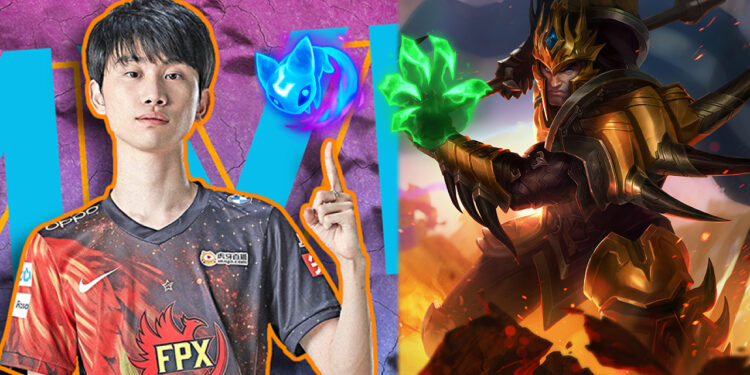 Been buffed for a while now, but Jarvan IV has recently been tested out by one of FPX’s best player.

After patch 11.16 update, Jarvan IV’s passive (damage increased from 8% to 10% of target’s current health) and his ultimate had also been buffed (from 150 percent to 180 percent bonus AD). With the buff, The LPL mid laner has been experimenting with mid-lane Jarvan with several different lanes because of these buffs.

In particular, Jarvan is a champion with quite a variety of choices, from building full damage to bruisers or even to full tank. So if his team lacks anything, Doinb will be the one to fill the gap (even though he still go for tank).

Jarvan is pretty common with keystones such as Conqueror or Grasp of the Undying cause of his playstyle. But after trying Jarvan in the mid lane with a pretty irritating full tank playstyle, Doinb discovered a new way of playing, Jarvan Aery, a damage-optimizing playstyle.

With this sort of poking ruin, Doinb’s new Jarvan will go laning with a poke style whenever he has his passive up, Summon Aery, and Scorch to burn up his opponent’s health.

At the same time, Doinb’s shield combined with the Potion, Biscuit with the Time Warp Tonic will generate an extra health gap between himself and the opponent, allowing him to continually pressurize the opponent and prevent him from farming.

Finally, the mid laner of FunPlus Phoenix also said that Jarvan would be FPX’s secret weapon at Worlds and this champion would be very strong at Worlds, like Lee Sin and Viego last time. “Maybe other teams will play Jarvan too.”