4 reasons why gamers should be fluent in many roles LoL 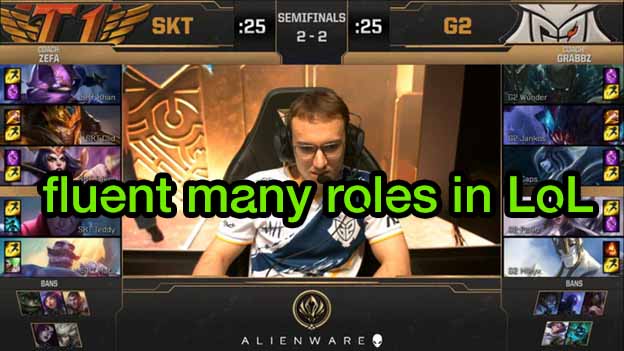 Although you may not like it, if you have the opportunity, you should practice playing as many roles as possible in League of Legends. fluent in many roles LoL

Depending on their interests and abilities, some players can perform their role well when in a certain position on the Summoner’s Rift map. These “main roles” players can reach a much higher level of proficiency than regular players, grasping the secrets and success tips that not everyone understands.

Fluent in many roles LoL

However, playing many different positions in the League of Legends also offers great advantages that not everyone knows.

Here are 4 reasons why you should practice playing a variety of roles in League of Legends:

1. Improve the results for sub placements and autofill

This is one of the most obvious reasons: during your rank-up journey, there will definitely be times when you are not allowed to play in your primary role but have to choose a champion in a supporting role or autofill to a position I’ve never played before. Practising a variety of positions before will work at times like this, helping the final result of that match not be too unsightly.

In addition, the “main role” players also often “main champ”, although not necessarily a specific general but also according to a common style and gameplay. For example, the top laner may be the main hero or the mid laner between the main wizards. When the meta changes, if your champion is reduced to the point where he can’t play anymore, extra roles can be a great lifeline option.

2. Understand the views of teammates

Trying to play a different role will help you understand the “rhythm” of other players on the team. At that time, you will feel better the intentions of your teammates even though you don’t really talk to them.

Riot is forcing me to change my name due to Coronavirus

For example, playing in the mid lane position when you are a “main jungle” player will help you understand when the mid lane can help you dispute the Scuttler Crab or can move down the bot lane for a gank 4 people. This will certainly bring great effect because it is not natural that people call League of Legends a team sport.

3. More proficient in many competitions and meta

In recent years, champions in League of Legends have been used in a variety of different roles. We’ve seen tanks like Sion get to the mid lane, Mage like Heimerdinger and Veigar are put to the bot and Lucian or Vayne are playing in the top lane.

By playing in different roles, you can adapt faster than other players whenever these meta changes unexpectedly occur. The champions of a position today can easily become the meta champions of tomorrow. The more familiar you are with the many champions and play styles, the better you can play against them or use them.

Finally, playing many different roles will improve the creativity of players, thereby helping the League of Legends constantly evolve. Imagine, if in a few seasons ago someone told you that SKT would be defeated by a team that brought Syndra to the bot-lane, it was definitely a joke. However, with the creativity of the players, that really happened in the MSI 2019 semi-final between G2 Esports and SKT.

In this game, G2 tricked SKT by making them think that Syndra would be used in the mid lane, so Faker made a choice of LeBlanc (the champion capable of countering Syndra). But in reality, G2 took Syndra to the bot lane and Caps later easily countered LeBlanc.

This trick in the Ban & Pick phase was a direct result of Perkz’s experience of playing in various positions (mid lane and ADC) and then led them to the final against Team Liquid and eventually to the final. MSI champion.