Gangplank is now even worse in patch 11.17 thanks to the rework from Riot 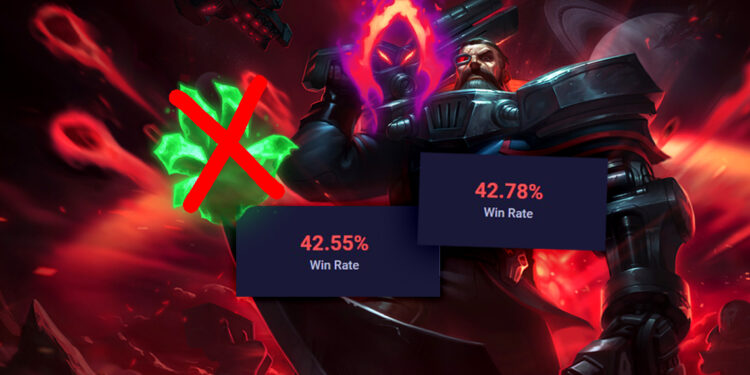 Tobias Fate was right all along…

Before patch 11.17, developer Phlox gave players on Twitter the decision to rework Gangplank or not, the feedback was positive and Riot was going to decide right away on the changes.

Eventually, Gangplank received a mini-rework in League of Legends patch 11.17. In the rework, Riot reduce the ability of him being a lane bully in the early game into a full crit-damage dealer in the late game.

This was possible at first, but GP players saw the major consequences. With the new adjustments, Gangplank’s powerspike from his Q and Grasp of the Undying will be much worse but you will still have to use that keystone since there is no better keystone for him.

The item path is also another point that makes players hard to follow. The new GP can deal a lot of burst damage with crit items but at the same time, he will be much squishier as players have long built Divine Sunderer for him.

Gangplank’s mini-rework win rate is at the worst

With any change, it’s probable that a significant number of players are still struggling on how to make the new GP useful.

According to u.gg, Gangplank’s win rate in Platnium and higher is one of the lowest in League of Legends in any position possible. In both Top lane and Mid lane, Gangplank is rated as the worst champion to play. His win rate is at 42.78% in the mid lane and 42.55% in the top lane.

It’s also probable that Riot will have to offer him some buffs in order to compensate for his full collapse. Hopefully, players will discover out what works best for them, but for the time being, the new GP isn’t looking promising.