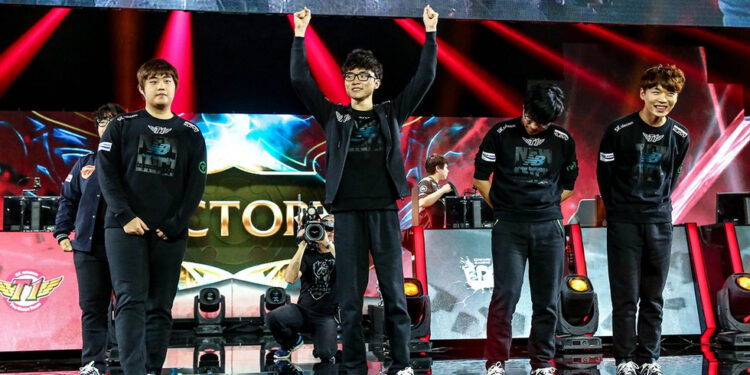 SKT (now T1) has the only Faker mounted for 8 years from its foundation, and other members are continuously replaced by coaches. SKT’s 2015 squad is recognized as SKT’s Dream Team – SKT2015

Faker has now become the chairman for both T1. It can be said that the thing that changed most is the Faker’s appearance. That year’s guy has become the hot boy, even making the face representing computer gear and ice cream.

The only thing we have to admit is that the level is no longer stable as before. As young gamers increasingly, Faker is still trying to change to adapt Meta. Despite this, Faker has always been an important link for T1 from 2013 so far.

Marin was praised as “Faker Top Lane”. He began his career in 2013, and until 2015 Marin was promoted to his career. In particular, he was with SKT who received the World Championship for the 2nd time.

And that year Marin received the MVP award. But then in the following years, he switched to LPL and things were not going well for him. Then in 2019 Marin officially retired at the age of 27.

He and Faker were the only two players to champion the World Championship three times in their playing career. Playing for SKT from 2013 to 2016, Bengi played as the main Jungle of the team. It was also known that he was the Ultimate of Faker when four years of playing together were more than enough that he and Faker cooperated well.

After Marin left SKT and joined Vici Gaming, due to the language constraints, he and his team had a season without sublimation. After all Bengi decided to return to SKT but as a coach in 2019. And now he’s doing your military service.

After leaving Skt, Bang continued his professional career, but in Europe. Bang’s career after leaving Skt has nothing too outstanding. In 2018, Bang joined the team 100 Thieves. And now Evil Gaming is the new home of Bang.

Wolf a greatest anti fan of Faker. That’s because Wombo Combo at WC 2017 were all captured by Faker and it took… Wolf’s Spotlight. After leaving SKT, Wolf continue to professional play. Until 2019 he officially declared and retired as a Streamer for T1.