How long do we need to play to unlock all champions with Blue Essence? 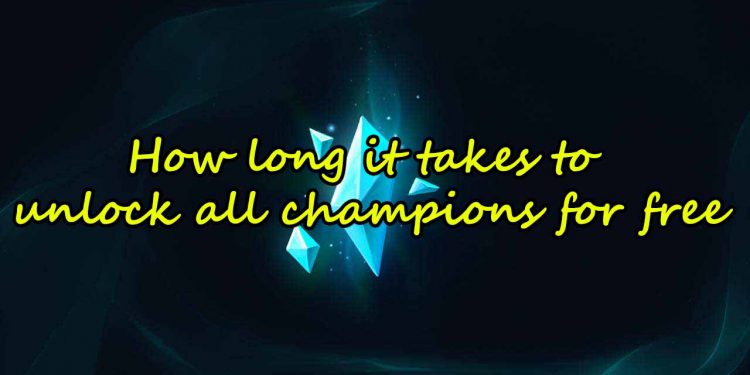 League of Legends is technically a free-to-play game, with no initial purchase or subscription required to play the game. Hypothetically, all gameplay aspects of League of Legends can be unlocked without ever having to spend money.

Not all champions are immediately available to new players, however. There is a free champion rotation of 15 characters, randomly selected each week, that is available to all players, but in order to unlock characters permanently, players must purchase them with either RP or BE.

Riot Point, or RP icon RP, is one of the primary currencies used to unlock League of Legends content, the other being Blue Essence. Riot Points are purchased with real-world currency and are only used in the Riot Store. Riot Points cannot be used to directly affect gameplay.

Blue Essence (BE icon BE) is one of the primary currencies used to unlock League of Legends content, the other being Riot Points. Blue Essence can be obtained by disenchanting champion shards contained in champion capsules that are awarded when levelling up.

In theory, a patient enough player could eventually unlock all of the game’s 148 existing champions or more…without ever spending any of their own cash.

An LoL player with a Reddit account, Lust_For_Love, spent a great deal of research to calculate the fastest or longest time needed to unlock the entire champion of League of Legends with BE.

Naturally, this calculation will depend on the player’s daily match and there will be differences between different servers in the store champion’s price or the rate of the BE received when opening different champions Shard…but will still be the most comprehensive.

According to calculations, if only one match a day, players will take about 3424 days to unlock the entire champion equivalent to nearly 9 and a half years. Naturally, this is probably the longest time because the player spends too little time.

If, for every 10 regular matches, the player takes just over a year to unlock the entire champions, including the tasks, events throughout the year that Riot offers to help players complete the collection faster.

If you can bring that average up, and also earn additional bonuses such as getting the chest for S-rated performances every week, the quickest estimate is at just over a year – although that requires a massive average of 10 games per day. There’s also a degree of diminishing returns for those extra games – although the timeframe might be shorter due to the number played per day, you’re also going to end up playing nearly double the total number of games.

However, in reality, not all players absolutely need to unlock all 148 champions of the game because each player position only needs a few champions or a certain amount of champions is more than enough.