How to Make Enemy Team Rage Quit with Shaco Support 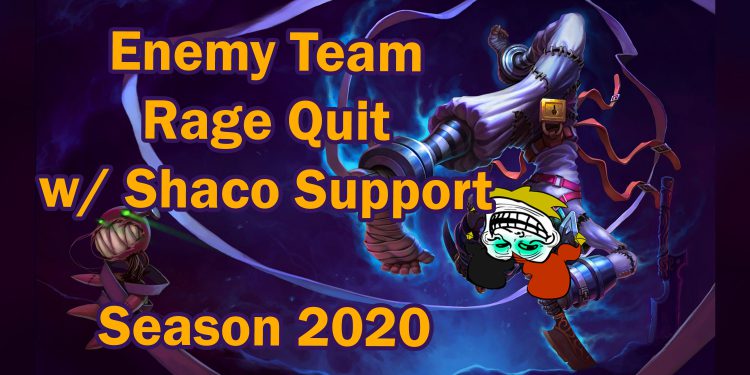 How many games have you played against/with Shaco support lately?

Pre-Season 2020, out of nowhere, Shaco suddenly became one of the most popular champions picked for the Support role.

After Patch 9.20, updates to Shaco have made this clown so powerful. Being able to level-up to level 3 in less than 40 seconds requires Riot to immediately release the hotfix to nerf him. However, that was not enough.

Shaco has not only appeared in high frequency in the Summoner’s Rift as a Top Laner or Jungler but also in a new position: Support.

What makes this psychotic support annoyingly powerful support at bot lane is his (W) – Jack in the Box. By being able to survive up to 40 seconds before being destroyed, you and your AD carry will always have “free” wards around the area. No worries about being ganked suddenly, because Shaco could be anywhere.

These “wards” are not normal wards, they can also fear the enemies when activated. When the Jack in the Box is activated, the box fears whoever in its range. This annoying effect along with the amount of damage it makes will make the enemies get tilted easily. When the time is right, your mission is to kill the enemies.

To create a massive amount of damage, you will have to build like a Mage with Liandry’s Torment. Not but not least, don’t forget that your main mission as a supporter is not about taking kills; it is how you placed your boxes effectively.

Then, the boxes will finish the rest: including revealing the enemy, surprising them, dawing their Hp bar with great damage and effects from the Liandry’s Torment, etc. to helping protect the AD carry or turret diving like a Pro.

League of Legends Streamers like Pinkward have also found many ways to take advantage as Shaco for the team fights in bot lane.

Shaco’s mobility and his scary Jack in the Box boxes made him a ban-worthy champion during the 2020 Pre-Season.

According to U.GG, the win rates of this Demon Jester as a support are 52.87%. This is a surprising high win rate for this champion in this role.

His ban rate is also pretty high at 14.1% showing that Shaco is storming at many Ranks in the world.

As such, you have an additional option for the Support role.

What do you think about Shaco in Support role?