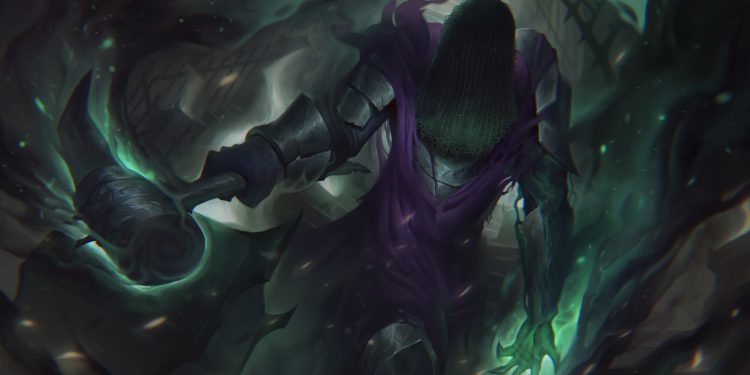 Ruined King – a mysterious name but many people resented when mentioning the name. Ruined King was the one who had made a peaceful kingdom suddenly transformed into a cold and creepy graveyard. Kalista and Hecarim are the ones who dare to stand up to him, but it seems that only two of them are not enough to be able to fight Ruined King so powerful

Therefore, a League of Legends player with a Reddit u / Reposer account came up with the idea of ​​a hero with the power of the fog in the Shadow Isles – Mordau.

Many days past, Mordau stood alongside the likes of Hecarim and Kalista, under a ruler who can only be remembered as the Ruined King. Present during the siege of the blessed isles, the blast which sent out the Black Mist corrupted as it did many others.

But in a bid to side with Kalista, he attempted to stop the Ruined King from making use of the Waters of Life and died in battle alongside her and the rest who agreed with her.

After the ensuing chaos that would come to create the Shadow Isles as we know them, Mordau would reawaken to find that he had become undead.

While he could recall the events which transpired prior to his death, Mordau could not grow furious, try as he might. Within him, Mordau no longer felt anything, save for a dull pain, only quelled by constant bloodshed.

Mordau slowly learned to harness the power of the Black Mist itself, using its power to corrupt his foes, and grow a personal unit of the undead. Now he travels Runeterra, in hopes of finding a cure to his current state.

If Mordau damages an enemy champion or large monster with an ability, they become infected, causing them to form a smog of the Black Mist on their location after

Within the Black Mist, Mordau is concealed. Enemy champions entering the Black Mist gain near sight limited to any connected clouds, and gain vision of Mordau for themselves only.

Mordau envelops his war pick in Mist, granting his next basic attack within 4 seconds additional effects.

If Mordau is within the Black Mist, this heals for twice as much.

If extracting strike kills its target, half of its mana cost is refunded.

Mordau conjures an orb of smog, lobbing it towards a location.

Mordau phases into an instance of the Black Mist within range, becoming unstoppable during this movement. This movement is obscured from enemies if Mordau is concealed from them prior.

Any champions damaged by this spell instantly create a cloud of Black Mist on their location.

After casting Mist of Death, Mordau is empowered for 8 seconds, lowering the cooldown of Call of Mist by 50%.

Spent a bit of time going over this with a few people, and finally created a champion concept I can feel good about.

Splash art was commissioned from /u/Noah_the_Thatcher, he did fantastic on this!

For the overview, I did my best to emulate a mix of styles that I hope fit in with League, basing most of the presentation off of the recently updated website.

Let me know what you all think!

This is one of the rare ideas that are thoroughly invested in both visuals and skills and stats. Although there are still many mixed opinions around him, this is indeed an admirable design because of its elaborate.