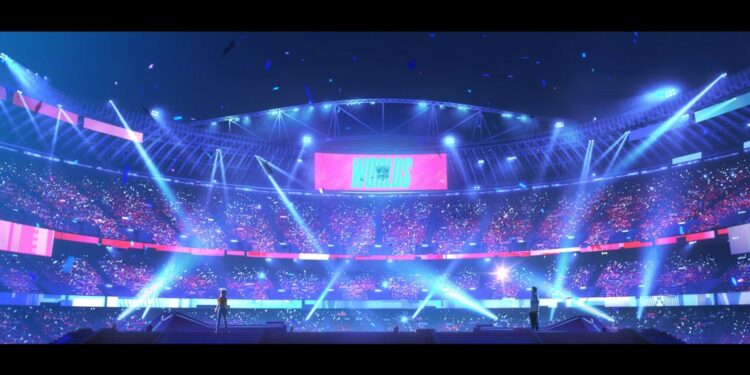 There are plentiful of interesting Easter Eggs in Take Over. You could miss it if you didn’t follow Worlds through each year. Check out P1 of Take Over Easter Eggs if you haven’t seen it.

The next scene is Faker watching his disciple running in the river through the Twitch stream. There are various chatlines of some commentators and players.

A shadow fly above the boy and a rock on the left with SSG logo, this maybe Crown’s Galio in Worlds 2017.

Year of the Underdog

The next opponent is Bebe’s Caitlyn of Taipei Assassin, the Champions of Worlds 2012 with a miracle adventure to the Champion Ship. You can see Taipei Assassin’s logo on the body of the gun. At that time the Asia region was not considered strong at all and a miracle happened. Through hardship and determination, TPA won themselves the Worlds title, defeated Moscow 5, Azubu Frost, and CIS Juggernaut.

A Jungler But Fully Commits To His Team

His next opponent is Jarvan IV, since the protagonist is taking the weapon of previous Legends, we will think this time is Ambition’s Jarvan IV because he is the protagonist of the Worlds 2019’s song RISE. But it’s not, it’s SKT T1’s Bengi Jarvan IV at Worlds 2013 with the T1 logo on the rock in a flash scene. Bengi is one the best Faker right hand. His playstyle is absolutely insane when other Jungler prove themselves with their own skills, Bengi comes out on top with the ability to control vision throughout the map and protect his carry extremely well.

The protagonist’s final opponent is Tian’s Lee Sin, the Worlds 2019 Champion. He fights Tian with weapons he collected but he can’t beat Tian. The boy then throws all the weapons and fight Tian with his strength and technique. Drakos, a LEC Commentator says on his twitter “Because all the weapons, all the tricks learned along the way. He leaves them behind. Because to win worlds, to be the best, to become a legend you have to evolve. You can’t be Mata or Xpeke or Insec or Rookie or anyone else you have to be the next leap in the league’s evolution.”. And you can see the FPX logo on the rock when the boy knocked back.

The boy then meets with his friend-rival, the girl from the beginning at the Worlds’s Stage. She also has a Red Stone similar to the boy’s Blue Stone. Red vs Blue, this is the color of the two teams in League, two rivals then ram in, fight each other to claim the title Champion in the Final of Worlds.

Final scene is Faker watch Worlds at home through his phone, as we all know, this year T1 unfortunenately can’t compete in Worlds due to their lost against GenG.

That is the end of all the big Easter Eggs that appears in Take Over. Even though there are tons of small details that we notice in the video, these Easter Eggs represent how League of Legends Worlds Championship has evolved throughout the passage of time. We have seen every King rises and falls, newcomer tries their best to achieve the glorious highest title. Maybe it’s the reason why Riot named this MV “Take Over”, we guess the song explains itself.