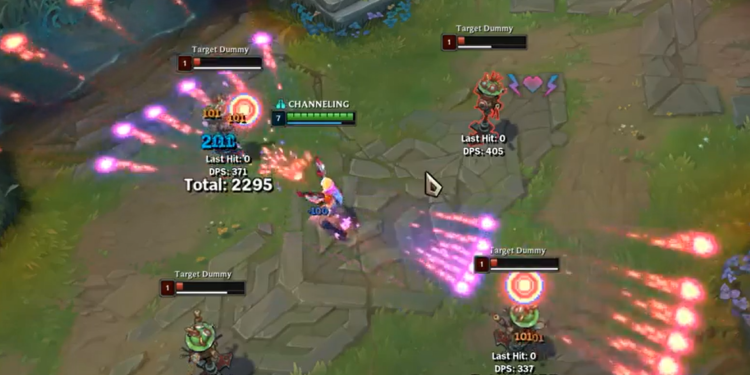 However, this interesting interaction with Miss Fortune only happens in Practice Tool

Lately, a post on Reddit in r/leagueoflegends has pointed out some really interesting interaction between Miss Fortune’s Ultimate and Galeforce, which allows her to cast her Ultimate in two different directions at once. The post has received more than 18k upvotes and almost reach 400 comments in a brief two-day time.

More particularly, after using her Ultimate for the first time, if you are fast enough, you can use Galeforce and then instantly cast her second Ultimate in a different direction. Note that this only happens in Practice Tool, with a 100% cooldown setting so that she can use her second Ultimate right after the first one.

This interesting interaction has led to other comments suggest making another video of her using her ultimate in even 4 different directions, which then happened to be possible as well.

After discovering that this isn’t a bug but just a special interaction in Practice Tool, many players felt relief since they won’t have to face “Doombot” Miss Fortune in their rank matches. But that feeling won’t last long, cause actually, there is another interaction between Miss Fortune and Galeforce as well.

Instead of allowing her to use multiple Ultimate, pressing Galeforce right before casting Ultimate will make it wider. Here is a clip from Vandirill about the mentioned interaction.

Currently, this isn’t yet classified as a bug, since the hitbox from the bullet stays the same, with more space between each row of bullets that cause the same amount of damage output. Whether this interaction will stay the same or be fixed in the next few patches is still unclear.

But one thing for sure is that Preseason is a time of chaos and madness where new playstyles that can shift the meta can be created, alongside tons of… bugs. In the meantime, we just enjoy the Preseason 2021 and waiting for the launch of the new season!