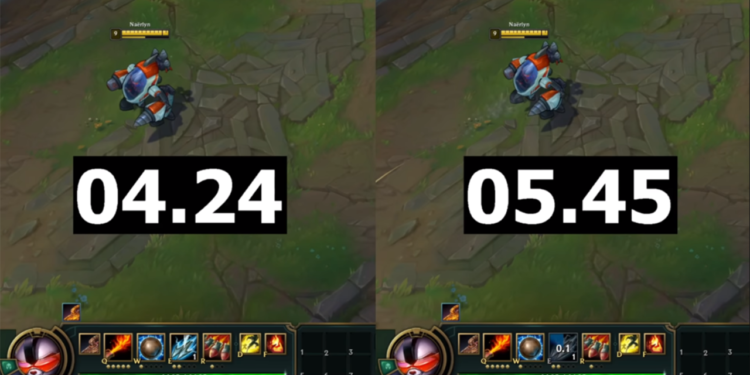 MSI 2021 is probably the debut of Jungle Rumble and so far, he is still having a seat in the current meta.

Since patch 11.9 came to live servers, Rumble has been a powerful option for the jungle as well as a reputable choice for pro teams. At MSI 2021, Rumble, Morgana, and Udyr had the highest presence percentage throughout the whole tournament. Their popularity remains unchanged when Rumble appears in almost every match in LCK/LPL 2021 Summer Split.

The strength of Jungle Rumble lies in the lightning speed of clearing camps. Just looking at this champion in pro matches, you will easily see that he can reach Overheating right at level 1. As a result, he can clear all the camps on his own due to the large amount of AS and on-hit damage provided by his passive. Nevertheless, some players realized that the ability in earning Heat so fast is actually a bug!

As stated by the passive’s description, Rumble’s Heat will be reduced by 10 per second if he has not used any skills for 4 seconds. Besides, his W has 6s of CD at level 1, so his Heat will be decreased before he uses his W again.

However, his Heat bar is having a bug and will be declined after a random period of time, specifically between 4.2 and 5.5 seconds, instead of 4 seconds as the description. So, Rumble will lose 20 Heat after 6-7 seconds and 100 Heat at level 1 now seems obviously possible – which totally strengthens him in the jungle.

According to some research of the community, this bug has existed in LoL for 4 years, starting from patch 7.12. However, most players have not concerned about this bug as it does not have any considerable impacts on Top-lane Rumble. However, when Jungle Rumble appeared, this bug has suddenly returned on a lot of forums.

Luckily, Riot Mark Yetter – the Gameplay Design Director for LoL – decided to nerf him as well as fix this bug in the upcoming patch 11.13. Particularly, W’s CD will be increased to 7 seconds at level 1 and its movement speed will also be reduced. Because of this nerf, Rumble will not be able to have 100 Heat at level 1, which lessens his speed of clearing camps.