League of Legends: 8 Interesting Custom Game Modes You Can Play with Friends (Part 1) 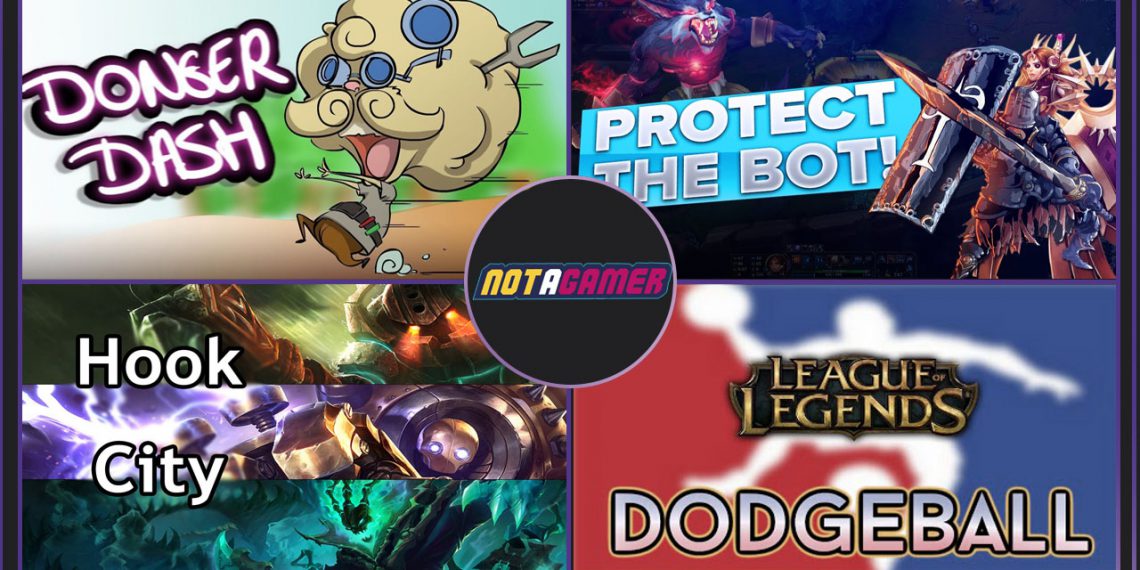 Getting bored at League but your friends keep asking to play? Here are some game modes you could try to play with your friends in Custom Game.

Choose 1 Bot on each team. Everyone has to protect that Bot from the enemy as well as trying to take down the enemy Bot. The First team that kills the enemy Bot 10 times wins.

The game is played 4 vs 4 + 1 Bot in both teams, the objective of the game is to kill the enemy Bot 10 times while protecting yours.

The Bot can be any champion and Beginner or Intermediate, but it has to be the same for both teams.

Start from the opposite Top lane bushes and then run near the wall for the whole race. The first team that has 5 people finish running 2 rounds around the map wins.

Pre-15 farming
•Everyone will be able to farm freely, both in lane and in the jungle (Drake and Rift Herald included)
•Turrets can be destroyed
•You can’t attack the enemy team in any way
•You can set up the map for the race, for example by placing traps or wards

At 15:00 everyone will have to go immediately in the Top lane, every team in their respective bush.
Someone will do a countdown in /all chat and at the GO! the race will begin.

This is the route every team will follow:
Start from the opposite Top lane bushes and then run near the wall for the whole race, until reaching your own fountain, where you will be able to heal up and buy items before continuing the race with the same route

The Race
•You will be able to attack and kill the enemy team in the midway during the race
•It is absolutely forbidden to turn back or to stop, you have to keep running until reaching your fountain
•You also can’t turn back to chase an enemy
•You have to stay close to the wall for the whole race
•When you die you won’t be able to leave your fountain after respawning, any way you can attack the enemy when they pass by
•The Race will continue even if an entire team has already died, so players in the same team have to compete

This game is played in the Baron pit, it’s a deathmatch where the teams will position themselves on the opposite sides of the pit and try to hit the enemy champions using only their skillshot ability, until only one team remains alive

•Level up only your skill-shot ability
•Everyone has to buy one Sapphire Crystal and a Control Ward, nothing else
•After buying, go into the Baron pit and place your Control Ward in the middle, to form a separating ‘net’ with the other wards
•Don’t try to damage anyone, disable your Auto-attacks in the Options (GAME>Scroll to Gameplay>Untick ‘Auto-attack‘)
•Each team has to position in one half of the Baron pit
•At this point arrange in /all chat a timestamp to start (ex. Start at 1:30)

•After starting you can’t leave the Baron pit
•Don’t surpass the wards net
•You can only use your skillshot ability to attack
•If you die, don’t go in the Baron pit and don’t use abilities until the round is over
•Never go near the lanes and don’t kill jungle camps, everyone has to stay level 1

At 10:00 and 20:00 the Rift Herald and Baron Nashor will spawn.
-At this time the game will have to be suspended and the teams can temporarily buy items to kill them, before resuming the game.

After playing for a while, the XP gained from champion kills will trigger level ups.
-At this point those who didn’t level up yet can go into a lane and get XP from minions, so that everyone will be at the same level.
-The skill points shall be put only in your skillshot ability.

The goals are simple: Win the game and Don’t get hooked!

Note: These game modes will be even more fun if you using Discord.