League of Legends: Bug win ratio in a match 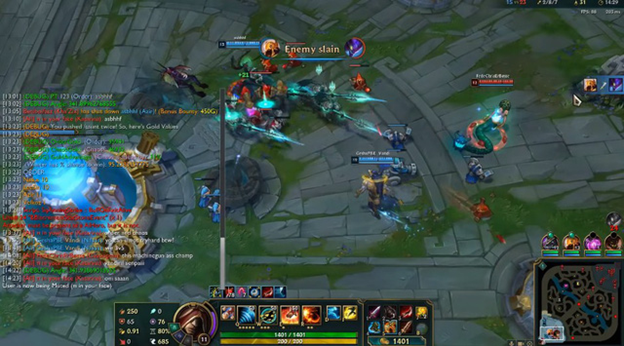 The players on the PBE server uncovered the unprecedented parameters Riot Games provided during a match, including your team’s win rate.

In order to keep its development and position, Riot Games has continuously refreshed League of Legends over the past 10 years. New features, new gameplay and new game modes are constantly being created to attract new players and keep old players attached to the game.

And it is likely that in the near future, Riot Games will also launch new features for LoL players.

Most recently, when typing / debug, the chat lines suddenly appear information has never been revealed.

Chat lines constantly pop up random strange commands. In particular, the most outstanding is the winning rate of a team in the match. This means that when the command line appears, players of both teams will know how much their team has % won.

This is an extremely interesting detail because no one knows how many% of his victory in that match. It is all based on emotions. It’s not clear what Riot Games relies on to figure this%, but if it does, it will surely make a huge difference.

Besides parameters of the winning rate, the chat table also displays the “confidential” information. There is a code that allows the player to see which enemy heroes will be weaker when faced with what kind of items.

Continue to the other parameters in the image above. It can be seen that the code system of League of Legends recognizes two teams: Order and Chaos. In a notice, the system tells them what the total gold earned of both Orders and Chaos is.

Since then the system analyzes the amount of gold difference between the two teams. This is probably one of the factors to calculate the winning rate.

If it was released, this could be considered as a huge, revolutionary feature of Riot Games for League of Legends.