League of Legends: Complete information about the World Championship 2019 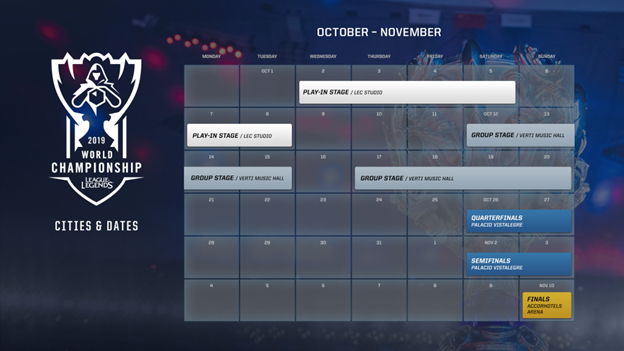 Where and when is the World Championship 2019 held?

This year’s World Championship will be divided into 5 stages: Play-in, Group Stage, Quarter-final, Semi-Final and Final.

– A Play-in period will start from October 2 to October 5 and October 7 to 8 at LEC studio, Berlin, Germany.

– The quarterfinal begins at Palacio Vistalegre, Madrid, Spain from October 26 to 27

– The semifinals will be held here on November 2 and 3.

– Finals will take place at AccorHotels Arena in Paris, France on October 10.

– Playin tickets will be sold on Universe.

– Tickets Group Stage will be sold on Eventim.

– Tickets for the quarterfinals and semifinals will be sold on Ticketmaster Spain.

– Final tickets will be sold at AccorHotels Arena.

2. When will tickets be sold?

– Playin tickets will be sold on Friday 30 August, 3pm CET.

– Quarter-final and semifinal tickets will be sold on Friday 30 August, 4pm CET.

– Final round tickets will be sold on Monday, September 16, 4 pm CET.

3. How many tickets can I buy?

– Each person can only buy 4 tickets per day of the event.

– Yes, to buy a ticket you need to create an account at the ticketing page above. To save time, we recommend that you set up an account before the ticket is open for sale.

5. How is the ticket price?

– Playin round at LEC Studio:

– Quarterfinals (2 1 Bo5 days) in the Palacio Vistalegre in Madrid, Spain:

Semi-finals at the Palacio Vistalegre in Madrid, Spain:

In addition, players can try their luck at Priceless.com to have a chance to see the World Championship with a professional gamer in a special row. Witness the magnificent opening and super rare photos.

Riot Games will have an official schedule after the draw on the table on September 23. The branch drawing process will be broadcast live with the commentator, analyst and guests of Riot Games.