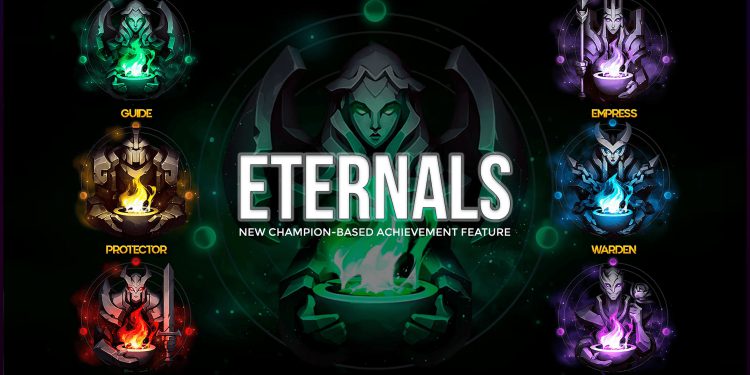 Eternals feature was mentioned in a Preseason 2020 video last August and got a lot of criticism from LoL players.

Eternals are a champion-based stat tracking system that flexes your moments of glory both in and out of the game. Essentially, players can hit statistical checkpoints of the champions they main.

According to Rioter Shio “Tummers” Shoyjo, “Eternals will track your per-game personal bests and rack up lifetime milestones for things like hooks hit, dunks duned, and more.”

Other features include new flairs for Mastery emotes, a list of Eternals on the back of your champion’s loading screen card, and a showcase on your enemies’ death screen after they’re killed by you.

Eternals will only be available to players who purchase them with Riot Points (RP), coming in two set types: Common for 225 RP or Unique for 590 RP. Updates at the bottom of this article.

One of the reasons why it got so much negative feedback was because players have to pay to activate the system. Also, it would give some unfair advantage towards players who have this feature.

According to a Reddit thread, the Eternals system provides a “tangible advantage” to players who purchase them.

“While Eternals are intended as primarily a cosmetic system, their stats update in real-time in the Eternals tab in-game, and the advantages of being able to have an eye on that are (IMO) more than just tangible and thus a problem,” the user said.

The Reddit user claims that the in-game tab informs players whenever they deal damage. So if a Lux uses her (Q) in a shrub, for example, she would normally have no indicator if the spell hit or not.

With the Eternals tab, she would see her damage increase and gain tangible knowledge that a player without an Eternal wouldn’t have access to.

Other players mentioned that “The Eternals’ stat tracker will allow players to scout the Fog of War and see if enemies are hiding in a bush. This will grant players who pay immediate information that players who don’t pay aren’t privy to.”

However, according to DotEsport, The Product Lead on Eternals – Ken Adams addressed this issue in a statement: “Just wanted to clarify that we have acknowledged the exploit that lets you gain info in Fog of War and will be addressing for launch. Not intentional.”

According to Riot’s Product Manager, they are making adjustments based on the players’ feedback including:

Eternals will now be separated into two set types: Common and Unique.

Unique sets will only include custom-built Eternals for each champion, such as Sylas’ “Stop Hitting Yourself” and Shen’s “Party Crasher.” They’ll be available year-round for 590 RP. Each set will contain three Unique Eternals per champion.

If you’d like to try out Eternals now, head over to PBE to test them out. They’ll remain on PBE until they go live.