League of Legends: Faker is a super dirty person, the shoes are spilled KimChi still wearing 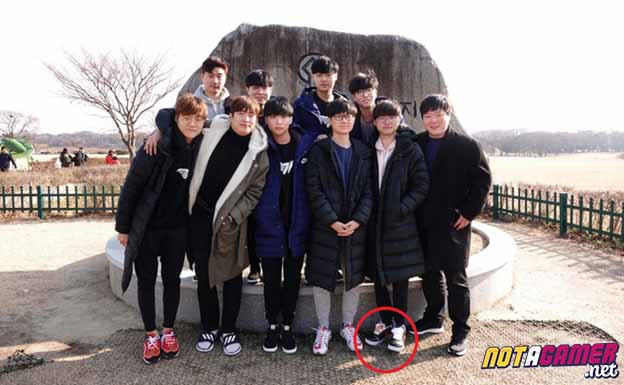 Lee Sang-hyeok (Korean: 이상혁; born May 7, 1996), better known by his in-game name Faker (Korean: 페이커), is a South Korean professional League of Legends player. Formerly known as “GoJeonPa” (Korean: 고전파) on the Korean server, he was picked up by SK Telecom in 2013 and is currently the mid laner for SK Telecom T1, which competes in the League of Legends Champions Korea (LCK).

Faker is renowned for his high mechanical skill and extremely versatile champion pool. He is best known for playing LeBlanc, Zed, Syndra, Azir, Ahri, and Ryze. He is the first player to have reached 1,000 kills in the LCK, and the second to have played 500 games.

On the eve of the New Year’s Eve on December 31, 2019, our Faker greeted the new year in a very difficult style, when spilling kimchi soup on Nike Air Force 1 Low shoes “Para- Noise “- a Korean limited edition designed by G-Dragon, with only 888 pairs produced, costs more than $ 1000.

Even on his personal Twitter, he was also excited to show that this is a unique version of Nike shoes “soup kimchi”. It was thought it was a joke, but until 5 days later, when the T1 team had a picnic in Gyeongju city on the occasion of the New Year, the new fans realized that Faker … carried the shoes with a stain kim chi still to hang out.

At this point, even Faker’s fans have no reason to defend him, even many people have to admire because he did not expect the smell of kimchi soup which is very sensitive, but Faker still endure, and wear shoes to hang out.

Some other gamers comforted themselves to avoid the image collapse, that the single son sometimes doesn’t know how to take care of himself, or “maybe he’s washed shoes but not clean… “

It was not until the fans “criticized” so violently that he announced that he had now thrown his shoes into the washing machine and put in lemon soda powder to remove the color. It is true that genius sometimes has difficult moments.