League of Legends: Fanart Skin Gravelord Pantheon is beautiful in every detail 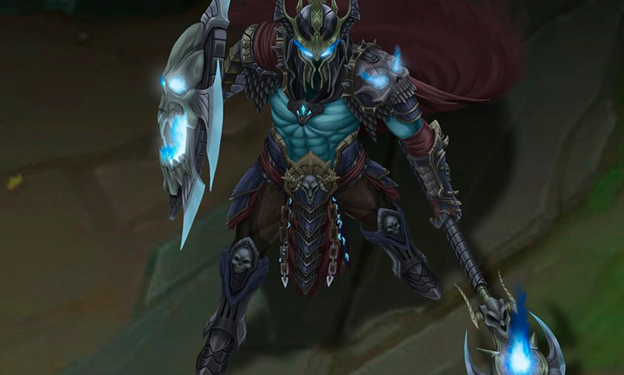 Pantheon after rework with tremendous power has become an inspiration for fans. The upgraded and powerful image made the rework of Pantheon well along with the skins designed by the artists.

Valkhar painter released the Gravelord Pantheon, with a mysterious Dark Tone. Especially in this Fanart, Pantheon also has a face with silver hair and dark blue skin.

Overall, Pantheon carries a shield with the face of a hellish demon and a spear made from cold steel. Both head weapons emit light of spiritual fire. The skulls and faces of demons are the main highlights on Pantheon’s armor. The hat revealed the glowing spiritual eyes that made Pantheon’s face scary.

The skill effect is designed based on the hellish color with the light blue of the soul and the dark green of the demon soul. Skill Q – Comet Spear will release a spear of glowing spiritual fire

Meanwhile, E – Aegis Assault will show the skull effect of the shield and spears that are released from the virtual shield.

When using the Ultimate – Grand Starfall, Pantheon’s body will glow with a raging fire, the spear is thrown from the ground to the ground, and represents the replacement of Pantheon – a giant skull that will fall to the ground.

Thanks to this work, Valkhar has received a lot of compliments from this idea. However, it is still a legendary saying: this is just a Fanart work, so we can only see this skin set on the drawing.