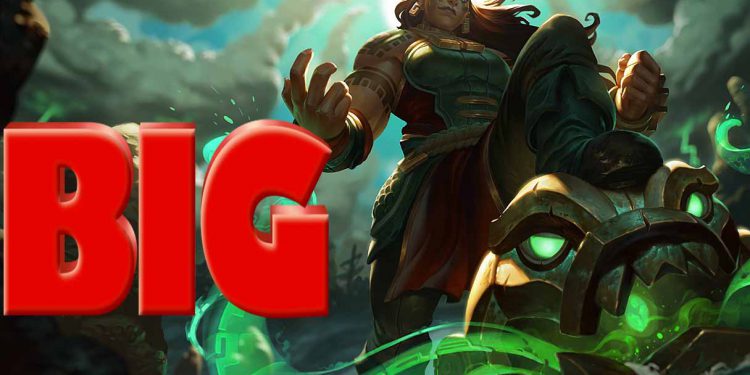 Illaoi is one of the most powerful female champions in League of Legends, from the mature body of a grown man to her massive damage, and now the weapon.

After being launched, though Illaoi’s ability to carry on the sheer amount of damage was too frightening. However, not too many people like her because her appearance is too muscular and masculine. And recently, another game error has occurred that makes the player continue to question her gender.

After using W on the minions, encountering an incident, Illaoi’s stance returned to the T (T-pose). However, this game error is really normal, until appearing in the case of Illaoi.

Unlike other champions when being brought back to T-pose, the golden image of Illaoi floats in front of the belly button less than 1 cm and grows a p.e.n.i.s that is big, long, and wet. It is incomprehensible, what is the intent of Riot Games when Illaoi’s T-pose design looks like this.

After the error of this Game was posted on Reddit, many players were surprised and scared when her p.e.n.i.s was too big and these players started thinking about Illaoi’s gender when the appearance of Illaoi she is far more muscular than a lot of male champions in League of Legends like Yasuo, Lee Sin, Zed or Braum, Urgot, Jax….etc

And from there a lot of Illaoi’s gender theories began to be made by the player, when a female champion could not have such muscle no matter how hard she trained because of the female hormone. much less than men no matter how persistent and persistent training can only be a little more muscular not so big

And perhaps, this is also the reason that Gangplank is Illaoi’s first love and also unique to Illaoi. It seems that Gangplank was also scared to the point when he first spent the night with her and suddenly saw Illaoi’s bigger than him so Gangplank decided to leave her.

Riot Games always aims to bring joy and humor to the players every time they log in to League of Legends. However, having fun like this might seem a bit excessive and scary.