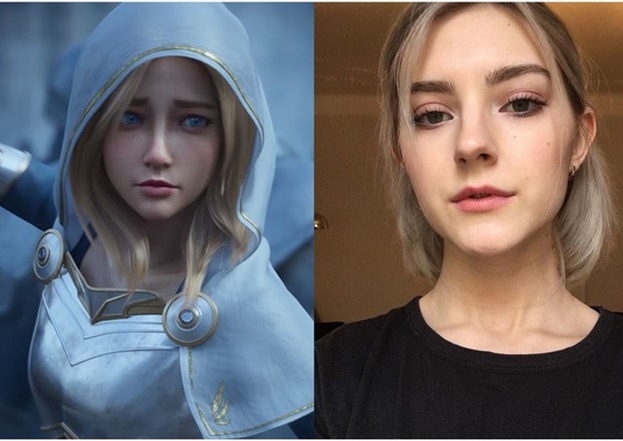 Following the success of the 2019 Awaken MV, Riot Games has continued to release the Cinematic for the League of Legends season 2020 – Warriors.

The champions who appear in the Cinematic are those whose lore is all connected with each other.

Lux, Galio, Sylas, Garen (Garen – Yuumi) in the cinematic of the Demacia war. As for League players, some of the most beautiful feminine champions are Lux, Kai’Sa, Vi (maybe not), and Caitlyn.

And I don’t know if it’s because of Lux’s favor or not, but the global League of Legends community seems to care about this champion. To the extent that there also appear groping components, looking for the real-life version of the beautiful Lux in the cinematic.

The girl in the photo above is named Eva Elfie – a very famous Western actress in adult movies. Indeed, with a beautiful face, blonde hair and white skin, Eva looks quite similar to Lux in Riot’s MV.

Below are beautiful pictures of Eva Elfie – “Lux in real-life”.

Warning: Some of the photos below contain sensitive content, which some people may find offensive or disturbing.